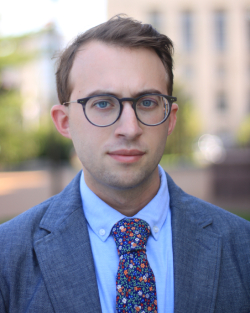 Nick Desideri (he/him) serves as Communications Director for Mayor Tishaura O. Jones. He joins the mayor’s office from the Service Employees International Union (SEIU) Local 1, a labor union representing 50,000 property service workers across the Midwest, including thousands in the St. Louis region. Nick began at the organization in 2015 as a Communications Specialist, working his way up to eventually become the union’s Communications Director through many organizing and contract campaigns. Prior to joining the labor movement, he worked as a press assistant in the office of Illinois Governor Pat Quinn.

Nick is a graduate of Illinois Wesleyan University and spent semesters in Washington, D.C. and Mexico City. He is an enthusiastic new resident of St. Louis by way of Chicago.