Residents in the metro area got moving during the First Annual Let's Move Golf Tournament. 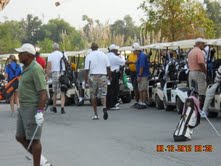 The City of St. Louis Department of Health and East Side Health District were proud to officially celebrate the conclusion of the Let's Move: So You Got Moves Golf and Walk Program with the First Annual Let's Move! Golf Tournament on Thursday, August 16th at the beautiful Grand Marais Golf Club in Centreville, Illinois. The culminating tournament featured 64 golfers of all ages and abilities. Players battled the heat as they played an 18-hole, 4-person scramble. The top two teams were awarded prizes.  Men and women competed individually for bragging rights for the longest drive and longest putt as well.

Prior to the tournament, the program featured a "Kids' Night" on Thursday, August 9th. Twelve kids participated in this special night where they were able to show off their newly learned golf skills on the course and win prizes. Every participant received a new backpack full of Let's Move! STL necessities. One lucky participant was rewarded for his golfing efforts with his very own set of golf clubs courtesy of Dick's Sporting Goods and the Health Institute. 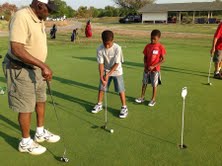 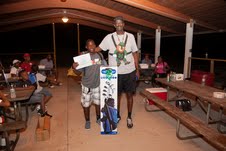 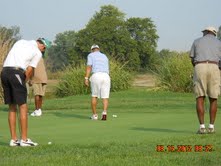 The Let's Move: So You Got Moves Golf and Walk Program was the first program of its kind in the area. Participants had the opportunity to learn the game of golf, brush up on their existing golf skills or play the course for free. In addition, non-golfers could walk the trails in the beautiful Frank Holten State Park. The program provided a great way to for parents and children to get moving together.  We hope to be able to offer it again next summer.

For more pictures from the program and golf tournaments, visit the City of St. Louis Health Institute website at www.healthinstitutestl.org.