Yolanda Reed, an employee in the Assessor's Office, joins the ex-smokers club. 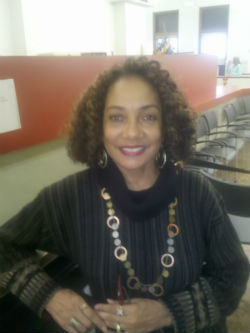 Yolanda Reed, a longtime employee with the City who currently works in the Assessor's office in City Hall, took a risk and won big. Reed made a decision to quit a habit that she has had for more than 40 years. Through her hard work and dedication, she has now joined the ranks of many ex-smokers who quit before her. Here is her story.

How long did you smoke? Reed revealed that she smoked for more than 43 years, starting after the birth of her daughter.

Why did you choose to quit? Reed admits she tried to quit before, but she was "not ready." So, what was different now? This time she reflected on her own experience with a father who smoked. "I was thinking about my age, and how cancer affected my father, and I didn't want my kids, or grandkids to go through what I had to go through with my father," said Reed. Additionally, she was also having her own health concerns. "I also felt a need to quit because my throat started feeling funny," said Reed. Although a test for the concern turned out okay, the experience motivated Reed to make a change.

How did you quit smoking? Reed enrolled in the City's smoking cessation program. She reflected, "the smoking cessation class held at the Carnahan Building, was a good experience, but I was surprised at how the class dropped to only a few of us. I was okay with that because it proved that the others were not ready." Statistics show that for many smokers it will take multiple efforts to quit before you are successful. However, starting with a great program will increase your chances of success.

What was it about the class that you found most helpful? "What was most effective for me during the class was seeing the Pam Laffin video, where she died from smoking," stated Reed. "I feel that Bee-Fit [the City's employee wellness program], was very instrumental in my efforts to become smoke-free, by promoting the City's smoking cessation class."

When did you quit? Reed replied, "On 8/31/13, I quit smoking and have been smoke-free since." By the time this article is published, Reed will be smoke-free for four months.

How has life changed for you since you quit? "I find myself eating more now, since food tastes better," Reed shared. "I also walk a lot more, take the stairs, and park further away from work, in order to get my exercise." Reed plans to "participate in more Bee-Fit activities, including Zumba, hula hoops, and yoga." These activities will assist her in avoiding the weight gain many ex-smokers experience.

The new year is a time for fresh starts. There's nothing fresher than starting the year out smoke-free. Yolanda Reed did just that. Now she has reduced her risk of developing lung cancer. According to the American Lung Association, lung cancer is the leading cancer killer in both men and women, surpassing breast cancer in 1987.  "Every year in the U.S. over 392,000 people die from tobacco-caused disease, making it the leading cause of preventable death." Second hand smoke (the smoke involuntarily inhaled by nonsmokers from other people's cigarettes) is a known carcinogen (cancer-causer) and responsible for approximately 3,400 lung cancer deaths per year. Therefore, quitting not only helps you improve your health, but it may help those around you to stay healthier, too.

Are you ready to make a change? If so, the City of St. Louis Department of Health's Smoke Free St. Louis Kids program will be starting another smoking cessation class soon. Please contact www.SmokeFreeStLouisKids.org or call (314) 657-1478 to get enrolled.