UPDATE:  A Tribute to Amadee

More Than Just the Weatherbird exhibit will run from Monday, Sept. 8 through Nov. 30, 2014 at Central Library. 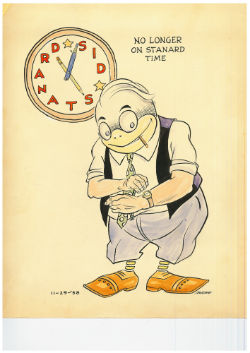 Update:  The exhibit will open on Monday, Sept. 8, contrary to what was originally posted.

The St. Louis Public Library is proud to host the exhibit, A Tribute to Amadee:  More Than Just the Weatherbird.  The exhibit opens September 4 in the Great Hall of the Central Library, 1301 Olive St., and runs through November 30.

Amadee Wohlschlaeger, who simply signed his work "Amadee," spent most of his 52-year St. Louis Post-Dispatch career as the artist for the Weatherbird.

On February 11, 1901, the St. Louis Post-Dispatch introduced the Weatherbird as an accompaniment to the front page's daily weather forecast.

A St. Louis native, Amadee was raised in the Carondelet neighborhood. He dropped out of school after the eighth grade, a common practice in the 1920s. He later studied art at St. Louis' Washington University.

Amadee was hired by the paper as a copy boy at the age of 17 in 1929. In 1932, he became only the fourth Weatherbird artist of the oldest and most continuous cartoon in America (113 years)*. Amadee spent 49 years as the man-behind-the-bird, the longest stint of any Weatherbird artist. He retired in 1981.

He was a larger-than-life personality. His signature look was chomping on a cigar, holding a glass of scotch, and posing in a brightly colored sports coat.

Amadee also spent 30 years as a sports cartoonist for The Sporting News. There he characterized many sports greats from Dizzy Dean to Stan Musial to Satchel Page to St. Louis Cardinals' Coach Whitey Herzog and legendary broadcaster Jack Buck.

Amadee spent the first two decades of his retirement as a freelance sports artist. It was not until he reached his early 90s that Amadee stopped drawing for the purpose of publication. He passed away on June 24, 2014, at the age of 102.