Mayor Francis G. Slay, 22nd Ward Alderman Jeffrey Boyd, and hundreds of volunteers led by the Americorps Coordinated Service Team, distributed 27,000 energy-efficient Compact Fluorescent Light Bulbs (CFLs) in the City's 22nd Ward and College Hill neighborhood on Monday, Jan.17 as part of the Dr. Martin Luther King Jr. National Day of Service.  More than 6,000 households received a package containing four CFL bulbs and literature explaining the benefits and proper use of the bulbs. Each CFL bulb will save residents about $30 over the bulb's lifetime.  Ameren Missouri provided the bulbs. 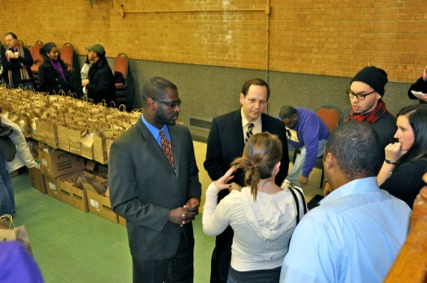 Shown from left are: Alderman Jeffrey Boyd, Mayor Francis G. Slay and Patrick Brown of the Mayor's Office meeting with volunteers before heading out to distribute the CFLs.

The initiative was made possible by the new Energy Saving St. Louis program.  As the program continues over the next six months, up to 400,000 CFLs will be distributed to City residents.  CFLs use 75 percent less energy than standard incandescent bulbs, produce about 75 percent less heat, and last up to 10 times longer.

Supplies used to distribute the CFLs were paid for with ARRA Stimulus finds from the City's Energy Efficiency and Conservation Block Grant award from the U.S. Department of Energy.