Let's Move! STL is Making Great Strides in the City

We've been on the move all summer.

The Let's Move! team has been extremely busy this summer. We began the summer with the Let's Move! Golf and Walk program during the months of May and June. Golf Academy was in session every Thursday evening from 6:00 p.m. to 8:30 p.m. at the beautiful Grand Marais Golf Club in Centreville, Illinois. During the academy, participants of all ages were provided golf lessons by experienced golfers and golf pros. Experienced players had the opportunity to skip the lessons and head straight to the links. For the non-golfers, walking on the beautiful 1-mile or 2-mile trails in the adjoining Frank Holten State Park provided an alternative way to be physically active. For the golfers, all of this activity led up to two tournaments.

The City of St. Louis Department of Health and East Side Health District hosted the 2nd Annual Let's Move! golf tournament on Friday, June 7, 2013. There was a great turnout of eight teams, who were ambitious and ready to compete in the four-person golf scramble. The teams competed on the 18-hole course, and were given incentive options at holes 6 and 13 to help buffer their score. Participants with the longest putt and longest drive were also recognized. Raffle prizes included St. Louis Cardinals gear, golf accessories and various gift cards. The top two winning teams also received special recognition and cash prizes. Golfers enjoyed a healthy meal after their long day out on the course.

On June 27th, Let's Move! STL concluded the Let's Move! Golf and Walk program with a youth tournament. This was the perfect opportunity for the boys and girls to show off their talent and all the skills they had learned as a result of the nine-week golf program. Each youth was provided a healthy dinner along with a Let's Move! STL t-shirt and other prizes for participating. They also got the added benefit of getting in lots of physical activity.

In July, Let's Move! STL was sharing the message of healthy eating and physical activity at a Be Healthy event with Radio One. 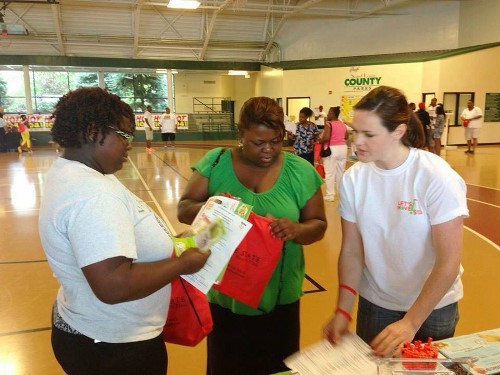 During the month of July, Let's Move! STL staff was invited to be a part of a national Let's Move! webinar highlighting large cities who participate with the national program. That webinar took place on August 21, 2013 at 2:00 p.m. You can check it out at the following link: http://www.healthycommunitieshealthyfuture.org/peer-learning-webinar-how-large-cities-can-achieve-the-goals-of-lets-move-cities-towns-and-counties/. The Let's Move! STL staff also began the planning effort for a major endeavor, a city-wide fitness and weight loss challenge. Watch for more on that in another article.

In August, Let's Move! was front and center at the Saint Louis Public School District's back-to-school fair. This is the largest back-to-school festival in the city. Through our participation, we were able to share the Let's Move! message with well over 2,000 community members of all ages. We will reinforce that message in the upcoming school year as we participate in nutrition education activities in local schools.

Altogether, this summer was a very productive one for Let's Move! STL. We have made great strides in spreading the Let's Move! program. We are working to actively engage surrounding cities and counties in this effort to make the St. Louis-Metro East area a Let's Move! region. However, there is still much to do. If you would like to be a part of this growing movement, please contact Melissa Ramel at 314/657-1571 or RamelM@stlouis-mo.gov.