Government Access Channel was recognized by the Board of Aldermen in Dec. 2011 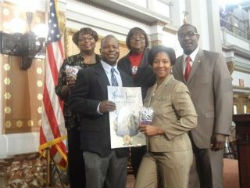 The resolution was passed in support of HR 1746, the Community Access Preservation Act (CAP) and recognizes the significant role that public, educational and government (PEG) access channels play in the City of St. Louis.

The government access television studio under the Communications Division has been producing public service television since 1991 and plays a major role in the transparency of government by keeping the electorate informed through the weekly televising of the Board of Aldermen meetings, committee meetings and hearings, town hall meetings, Mayoral press events, Ward news and events, and the promotion of city services.

Congratulations on 20 years of service to the City and the citizens of St. Louis!