What We Did Over Our Summer - Part 2

Monsters in the Dog's Bowl:  A Day in the Life of Mosquito Hunters 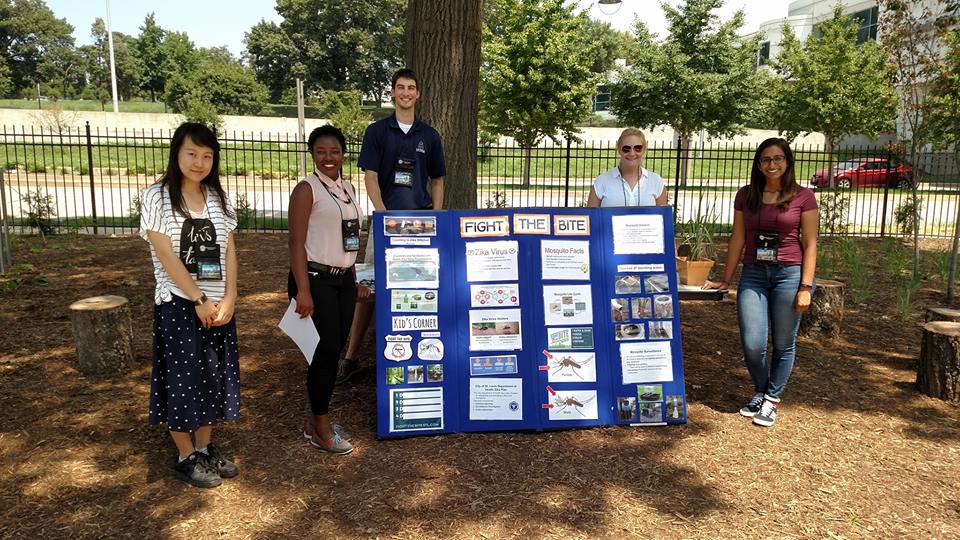 What We Did over Our Summer, Part 2 - Monsters in the Dog's Bowl: a Day in the Life of Mosquito Hunters

Early in the extreme afternoon heat on Monday, July 25th, a group of five young adults drove slowly around the neighborhoods in the City. Nobody was talking. No cars were around. It was quiet and hot during that time of the day. Suddenly, they stopped at a vacant house near the corner of O'Fallon Park. It was a wooden building surrounded by trees and bushes. The windows were sealed up with boards. It appeared to be unoccupied. The five adults stepped out of the car and approached the property with tools in their hands. Two of them checked out the back of the property while three looked around carefully in the front yard.

One team member stopped at two pet bowls on the ground in the front yard. "Here, we've got some," he said excitedly.  The entire team gathered around the bowls. It had rained the past few days and there was some dirty water in each of the bowls. Another team member pulled out a bottle and carefully scooped a bit of the dirty water into the bottle. Everyone stared at the water in the bottle, looking for something and holding their breath. After observing for a few seconds, one of the team members exclaimed, "that's it!" Having found what they came there for, it was time for the team to wrap up. One team member dropped the sample into a bag and sealed it. A second team member pulled out a marker and tagged the bag. A third team member checked the longitude and latitude of the location. The fourth team member recorded the description of the property into a tablet. The fifth team member checked the temperature and humidity at that address. After all the steps were completed, the team prepared to depart. Before leaving, one of them dumped the rest of the water out of the dog bowls, leaving them upside down.

What you have just experienced is a moment in the life of a 'mosquito hunter'. The creatures they found in the pet bowls and sealed in the bag were key evidence - mosquito larvae. As adult mosquitoes, they might also be carriers of the Zika virus, a virus believed responsible for birth defects in infants born to infected women. The Zika virus is spread to people primarily through the bite of an infected mosquito. Currently we do not know whether we have the variety of mosquitoes that carries the Zika virus in the City. By setting traps to catch mosquitoes, collecting their larvae, and sending them to the state laboratory for testing we can determine whether the Zika virus is present in our area.

The 'mosquito hunting' team was made up of graduate and undergraduate students from various backgrounds who were interning with the health department. "These interns worked with the City of St. Louis Department of Health during the summer to re-establish a mosquito surveillance program," said Jeanine Arrighi, supervisor of the team. To help prevent the spread of the Zika virus, mosquito control was a priority public health issue this summer. In early June, the Department of Health recruited the five interns and sent them to mosquito surveillance training. In addition to their mosquito surveillance activities, the interns also established a 'Fight the Bite' showcase board, doing presentations to educate audiences at 1520 Market Street, the Missouri Botanical Garden, the Science Center, a YMCA Camp Site, and at multiple PIER community events throughout the City this summer.

The interns are providing a valuable service as they help to protect the public health of the City's residents. However, City residents can protect themselves by following the 4 Ds: 1) Draining any standing water present in your yard each week, 2) Dressing in long-sleeved shirts and long pants while working outside, 3) applying DEET or other approved insect repellents, and 4) limiting time spent outdoors at Dawn and Dusk when mosquitoes are most active.

For more information on this health issue, please contact the City of St. Louis, Department of Health, Environmental Services at 314/612-5300.