The Archives: This content is archived for historical purposes and is no longer maintained
STLOUIS-MOGOV Mayor Tishaura O. Jones

A Plan to Reduce Vacant Lots and Buildings

Vacant, abandoned, and blighted properties have been a serious challenge for St. Louis dating back decades. Since our peak population in 1950, the City has suffered a steep population decline of over 60 percent, leaving vast stretches of vacant buildings and lots where homes and businesses once thrived.

In 1971, to combat the increasing challenge of abandoned properties, the City of St. Louis established the first landbank in the United States, the Land Reutilization Authority (LRA). LRA is a City agency with the mission of receiving and holding vacant and abandoned tax-foreclosed properties until new private owners can purchase the properties and return them to productive use.

Of the 129,000 total properties in the City of St. Louis, approximately 25,000 are considered vacant and abandoned. The majority of vacant properties in the City — 13,200 — are privately owned. The LRA owns nearly 11,500 properties — 3,400 vacant buildings, and 8,100 vacant lots. A combination of overgrown vacant lots and empty crumbling buildings, these 25,000 vacant properties blight our neighborhoods, decrease the values of nearby occupied properties, and pose serious health and public safety risks for our friends, families, and children. Vacant and abandoned properties also strain City resources. Nothing good happens in a vacant building.

Since coming to office, vacancy reduction has been a top priority for my administration. One of our first objectives was calculating the financial burden  that vacancy and abandonment have on City operations. We found that the fiscal toll of vacancy on the City’s operating budget in 2017 was estimated at nearly $66 million. After better understanding the maintenance and public safety costs associated with 25,000 vacant properties, it was clear we needed a new vision.

Beginning July 2017, I asked City departments to organize their vacancy and blight reduction operations around five principles, and this plan will outline how we’re addressing each one:

Over the last 12 months, this administration has used data to gain insight into the true impact vacancy and blight on St. Louis. We have also been busy implementing and piloting many of the vacancy reduction strategies in this plan.

The success of our programs will be evaluated over the next year, and we’ll adapt existing efforts and add programs as new ideas and best practices emerge. The following vacancy reduction plan outlines initiatives that will foster safer neighborhoods, rehab and reoccupy buildings with new residents and businesses, and revitalize communities. This will drive the growth of our City’s tax base, public schools, and the taxing districts which fund our regional cultural institutions and City services.

This is just the beginning. I am encouraged that through the partnerships we’ve established over the last year, our work will improve the lives of St. Louisans and revitalize neighborhoods across the entire city.

Data-driven decision making is key to successfully targeting and reducing the number of vacant and abandoned properties. Coordinating data and information across City departments allows our administration to accurately measure and track the City’s progress toward reduction goals. Better data also ensures more efficient, effective, and equitable service delivery for residents. We’ve developed a series of initiatives, staff positions, and collaborations to improve data accessibility, its utility, and overall quality.

Reduce the Number of Properties in LRA’s Inventory

The City’s Collector of Revenue begins the process of tax foreclosure for properties after property taxes have gone unpaid for three years. It often takes four to five years before delinquent properties are actually sold. We know that tax delinquency is one of the first signs that property owners are either facing financial difficulty, or have abandoned the property altogether. Once abandoned, these buildings are frequently vandalized and begin deteriorating well before the four to five years it takes for them to be sold in tax foreclosure. Foreclosed properties in the best structural condition with highest resale values are almost always purchased at the tax sale by private buyers. Any properties that do not sell to private buyers are automatically transferred to LRA by default. By the time LRA receives ownership of these buildings, they have generally been abandoned, vandalized, and have fallen into disrepair. In 2017, LRA received 298 properties through tax foreclosure. These properties represent some of the most difficult buildings to rehab and market in St. Louis.

Despite these challenges, LRA sold 551 properties in calendar year 2017: 201 buildings and 350 vacant lots. LRA’s goal for 2018 is to increase the number to 600 properties sold. In order to be more aggressive in reducing its inventory, I’ve asked the LRA and other City agencies to prioritize a number of new programs and initiatives.

Every property in the City of St. Louis has an owner, and every private property owner shares the same responsibility for property maintenance. There are 13,200 privately owned vacant properties across the city: 9,400 vacant lots and 3,800 vacant buildings. Unfortunately, many of these privately owned properties are not well maintained, have been abandoned, and will eventually end up in LRA’s inventory. As a result, the burden of cutting grass, boarding up exposed windows and doors, and securing crumbling buildings falls to City government. Unresolved code violations result in unsafe conditions for neighbors and surrounding businesses. These conditions can also lead to crime in and around the building.

Unfortunately, some properties are just too far gone to renovate. As a result, these vacant and abandoned buildings pose a significant public safety hazard to nearby residents. The Building Division has a current estimate of nearly 4,000 vacant buildings across the City that are condemned and require demolition. An average building demolition costs the City $10,000. Last year’s 2017-2018 budget allocated $1.5 million toward citywide demolitions. In this upcoming 2018-2019 budget, we have allocated $3.6 million for building demolitions because removing dangerous vacant buildings from our neighborhoods has to be one of our top priorities.

Addressing vacancy is complex work. Reducing the 25,000 vacant and abandoned properties will require modernizing our current programs and looking toward national best practices. St. Louis is not the only city dealing with these issues. Seeking best practices allows us to move more quickly. The following programs have worked in other cities:

The City’s approach to addressing vacancy will evolve over time. We have a number of initiatives on the horizon that we’re thinking about in collaboration with community stakeholders.

Local government alone cannot adequately solve all the challenges we face with vacant and abandoned properties. Development of the programs and strategies in this plan happened with a great deal of support from local community partners, state and federal agencies, and committed St. Louis residents. Thank you to everyone who has contributed to making our neighborhoods stronger, and for continuing to support our future efforts to reduce vacancy and blight across the City. Thank you to the following agencies and organizations whose work and support contributed to this plan: 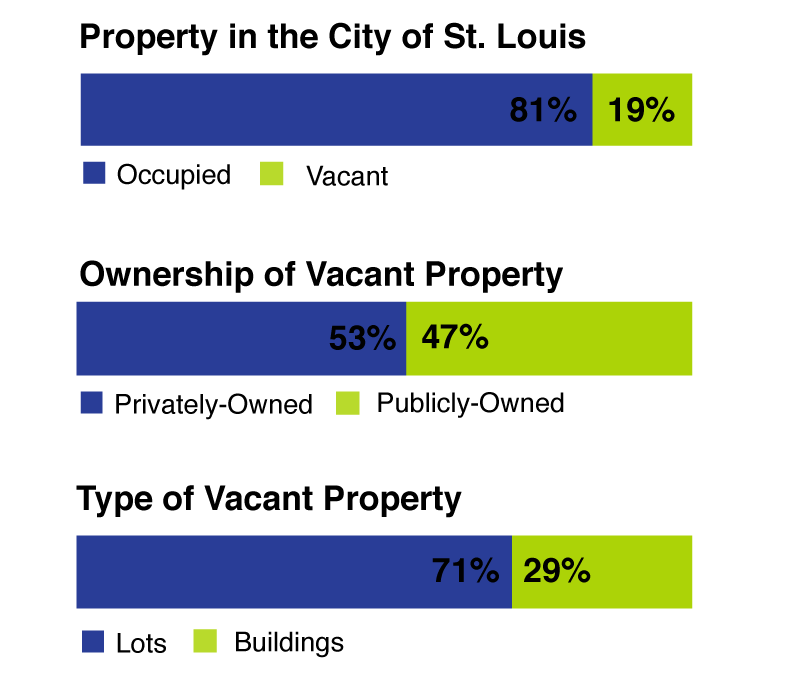