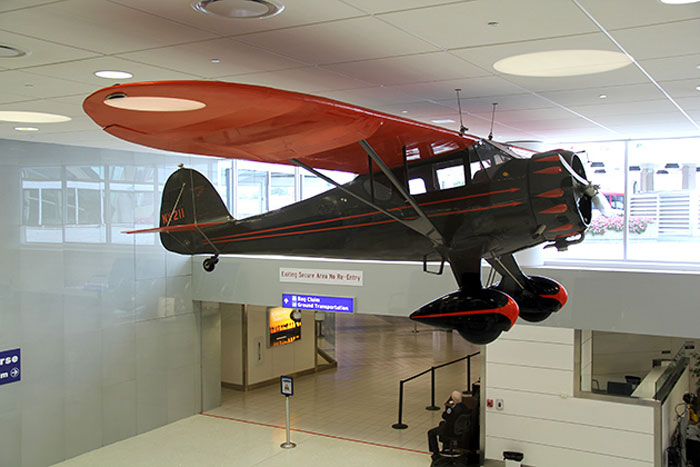 After a two year hiatus, a historic plane once owned by Charles Lindbergh has returned to Lambert-St. Louis International Airport to hang once again over the C Concourse Checkpoint in Terminal 1. The Missouri History Museum completed a nine-hour installation of the 1934 D-127 Monocoupe aircraft on Sunday, Oct. 20. Wings and other equipment were attached onsite prior to raising the plane into position.The Museum is sharing the experience of the complicated installation through a time lapse video.

The Missouri History Museum has also installed a new interactive history kiosk which is in line-of-sight of the aircraft from the upper level of Terminal 1 overlooking the checkpoint atrium. The kiosk displays the history of Lambert and Charles Lindbergh and also chronicles the efforts by the Museum to save and exhibit this historic aircraft over the years, including its most recent restoration.

The plane was removed in March of 2011 to make way for terminal renovations. During that time, the Missouri history Museum conducted a historic conservation effort of the aircraft, which included preserving the aircraft’s original fabric skin. The Monocoupe was originally installed at Lambert in 1979. The accumulation of dust and other airborne pollutants over 30 years made it necessary for the plane to undergo a complete conservation effort in order to ensure the continued preservation of the aircraft. Stress fractures along several seams in the plane’s fabric covering and the tears caused by general wear required professional attention.

Charles Lindbergh’s Monocoupe plane was built by Lambert Aircraft Corporation in August 1934. It was just one of three planes built completely in St. Louis by the company. He donated it to the Missouri History Museum in 1940.

Conservator Linda Landry managed the conservation effort. She consulted with professional aircraft conservators and performed chemical test analysis on the plane’s paint and fabric to confirm they were working with original materials. This is exceedingly rare for an aircraft to have maintained its original covering for so long. Once the age of the fabric and covering was established, all effort was made to retain the historic integrity of the plane.

The Monocoupe was constructed using “fabric and dope,” a process still used today. Historic materials and the passage of time create unique challenges for preservation and conservation. In this type of construction, fabric is fitted over the frame and then covered with several layers of airplane dope, a lacquer that is used to protect, waterproof, and make taut the cloth surfaces of airplanes. As the dope dries it shrinks, causing the material to stretch tightly over the frame, creating a smooth surface. Unfortunately, the dope never stops shrinking, so over the years the ever-tightening fabric can put pressure on the framework until the fabric either tears to relieve the stress or weaker parts of the interior structure snap.

The Missouri History Museum conservation team repaired seams and tears with precision patches and paint compounds. A full inch by inch cleaning of the interior and exterior of the plane was undertaken to remove nearly 34 years of accumulated contaminants. The historic plane now shines again for the millions of passengers and visitors who pass through Lambert’s Terminal 1 every year.