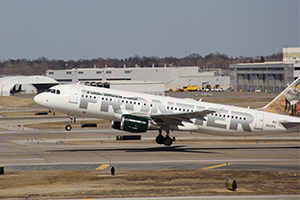 Frontier Airlines announced it's expanding at Lambert-St. Louis International Airport with new service to Atlanta beginning April 14, 2016. The non-stop flight between Lambert (STL) and Hartsfield Jackson Atlanta International Airport (ATL) will be three days a week (Tuesday, Thursday and Sunday). Introductory fares to Atlanta are as low as $39 (one-way) for flights through August 15 and are available now at www.flyfrontier.com.

Atlanta will be the seventh destination served by Frontier from Lambert. Frontier currently flies daily to Cancun, Denver, Fort Myers, Las Vegas, Orlando, and Tampa Bay. St. Louis was one of multiple cities that will see expanded service from Frontier this spring and summer.

“Travelers between big cities have enjoyed low fares while many markets have remained overpriced and underserved,” said Frontier Airlines President Barry Biffle. “Frontier’s low fares in these new markets will benefit millions of new fliers who are forced to drive because they haven’t found affordable air travel options – or they simply stay at home. We see hundreds of additional opportunities like these throughout the country, fueling our growth for years to come.”