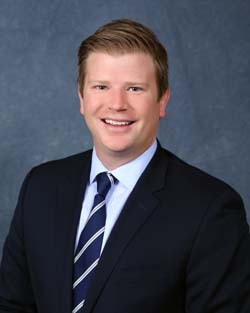 Jack was elected Alderman of the 7th Ward in the Spring of 2015. Jack became an active member of the 7th Ward and the Soulard community from the moment he graduated from Saint Louis University with a degree in economics and political science in 2008. He has been active in the Soulard Restoration Group and served as an officer of the Soulard Special Business District, where he has helped ensure that SSBD funds are spent properly on security patrols and safety initiatives.

Deciding to attend SLU Law School, Jack worked full time while attending classes at night, graduating with his J.D. in 2012. While in law school, Jack interned with the United States Attorney for the Southern District of Illinois. Following graduation, Jack served as Assistant Circuit Attorney in the Office of Circuit Attorney Jennifer M. Joyce, where he largely prosecuted drug and gun crimes, burglaries and car thefts. In this position, he managed a large number of cases set for jury trial, interviewed police officers, victims and witnesses, and determined what charges, if any, should be filed. He also regularly attended neighborhood meetings, advocating for victims and encouraging citizen and neighborhood-level participation to deter crime.

Jack is also an active Democrat, working numerous political campaigns in Missouri and St. Louis’ bid for the Democratic National Convention. Most recently, Jack worked as Voter Protection Coordinator for Senator Claire McCaskill’s 2012 re-election campaign and for the Missouri Democratic Party. Jack ran a statewide program involving more than 500 attorneys to ensure that all eligible voters were able to cast their ballots. Prior to that, Jack served as executive director of the St. Louis Democratic City Central Committee. In 2009, Jack was the deputy field director for Mayor Francis G. Slay’s re-election effort. Jack began working on political campaigns in Missouri as president of the SLU College Democrats and then as a field organizer for President Barack Obama’s 2008 campaign, where Jack organized a number of areas, including the 7th Ward.