Mayor Rahm Emanuel today announced that 12 other cities have joined the City of Chicago in posting research from the U.S. Environmental Protection Agency’s (EPA) Climate Change Website after the Trump administration unceremoniously removed it from the federal government’s websites on April 29.

“It is inspiring to see so many mayors from across the country stand up for the environment through the preservation of this data,” Mayor Emanuel said. “Making climate change research widely available underscores that facts cannot be disputed and science cannot be erased. I will continue to work with these Mayors and all those involved in the Climate Alliance to take action at the local level, including honoring the Paris Agreement.”

After the creation of the City of Chicago “Climate Change is Real” website on May 7, Mayor Emanuel called on other Mayors to post the climate change information, ensuring the public has ready access to information the EPA developed over decades of research. The Mayors and cities posting information include:

The Chicago Department of Innovation and Technology has uploaded this information to an open-sourced website so that other cities, academic institutions, and organizations can post it to their own websites at https://chicago.github.io/climatechangeisreal/. It includes information on the basic science behind climate change, the different ways in which weather is impacted from increased greenhouse gas emissions, and actions the federal government has taken to reduce the impact. These 12 cities will continue to build out and make updates to their climate change pages in the coming days and weeks.

“Cities have been stepping up to safeguard the public in creative and important ways as DC shirks its leadership on climate change,” said Rhea Suh, President, Natural Resources Defense Council.  “Chicago’s effort to preserve and post important climate data is a huge victory for transparency, science and community health—front lines in the battle for climate action these days. And Mayors from across the country—Republicans and Democrats, from big cities and small towns—are stepping into the breach to ensure we reduce carbon pollution and protect our neighbors from the dangerous impacts of climate change.”

On June 7, Mayor Emanuel signed an Executive Order formalizing Chicago’s commitment to adopt the guidelines of the Paris Agreement after President Trump withdrew the United States, reneging on a consensus with 196 countries on environment protections. The Executive Order doubles down on the Paris Agreement’s goals of reducing greenhouse gas emissions and limiting global temperature rise to two degrees Celsius above pre-industrial levels.

This builds on recent progress of Chicago’s reduction in carbon emissions by seven percent from 2010 to 2015, despite an increase in population. This benchmark is equivalent to shutting down a coal power plant for eight months.

Last week, Mayor Emanuel joined over 200 mayors from around the country to commit to the Paris Agreement as part of the Mayors National Climate Agenda, or Climate Mayors. This network of U.S. mayors — representing over 56 million Americans in red states and blue states — work together to strengthen local efforts for reducing greenhouse gas emissions and supporting efforts for binding federal and global-level policy making. Mayor Emanuel also joined over 1,000 state, local, and business leaders from across the country as part of the “We’re Still In” campaign, coming together to signal the importance of the Paris Accord both nationally and across the world.

In April, the Mayor announced that by 2025 all of Chicago’s public buildings will be powered by 100 percent renewable energy. That transition means that eight percent of the city-wide electricity load or 1.8 billion kilowatt hours will come from clean and renewable sources. This follows the 2013 commitment that the City made to eliminating coal from its electricity supply.

Earlier this year, the City of Chicago was awarded the U.S. Environmental Protection Agency 2017 ENERGY STAR Partner of the Year Award. The award is given annually to honor organizations that have made outstanding contributions to protecting the environment through energy efficiency and recognized the Retrofit Chicago Energy Challenge and its 76 member buildings covering 51.3 million square feet-all of which have committed to reducing their energy use by 20 percent. The award also recognized the four years of successful implementation of the City’s Energy Benchmarking Ordinance which has reduced energy use by four percent in buildings covered by the ordinance.

Below is a listing of all URLs created using the Chicago’s open source website and the EPA Climate Change information: 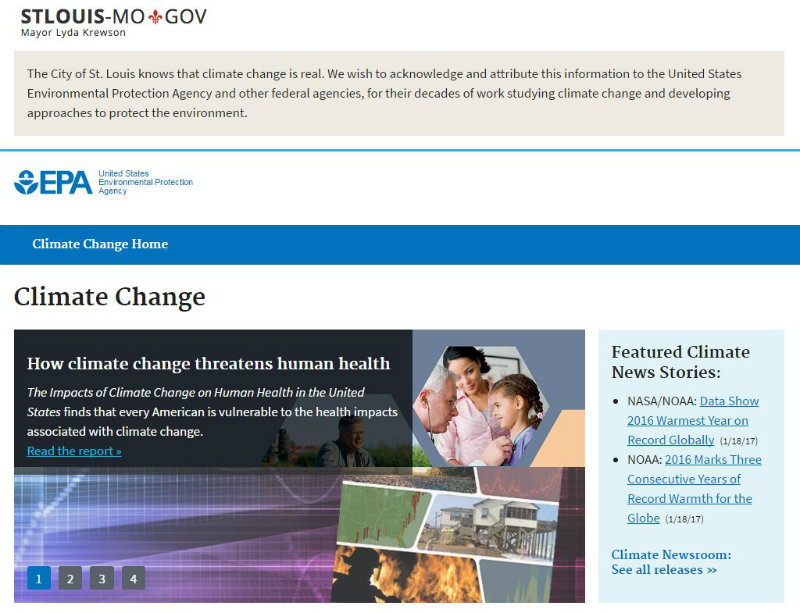