Board Bill208CS establishing a  Civilian Oversight Board signed by Mayor Francis Slay becomes effective as law. Applications are now accepted. 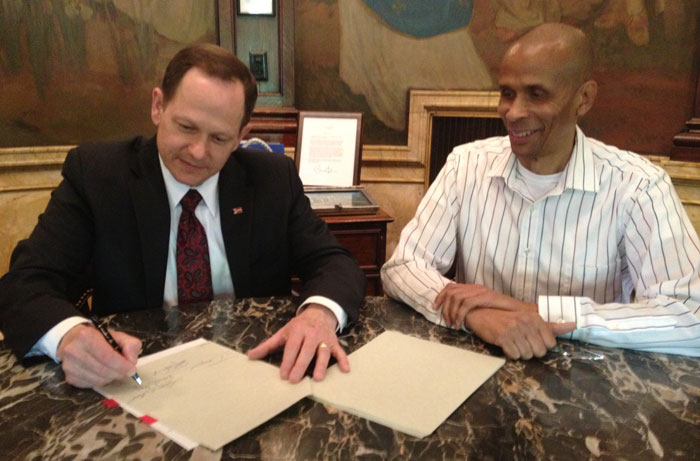 ST. LOUIS -- A board bill signed by Mayor Francis Slay to establish a Civilian Oversight Board in the City of St. Louis becomes effective as law as of 6.5.2015.

Board Bill 208CS, introduced by Alderman Kennedy and sponsored by Alderman Antonio French, creates a civilian board to receive and review complaints about the St. Louis Metropolitan Police Department. The City of St. Louis is now accepting applications to become one of seven members on the board.

Appointment to the Civilian Oversight Board (COB) requires nomination by the Mayor and confirmation by the Board of Aldermen. A copy of the application will be provided to the aldermen from an applicant's COB district, but interested individuals may also contact their alderman directly to seek her or his support.

"I want to thank the citizens of the City of St. Louis who are willing to serve on this board to help enhance trust between police officers and the community," Mayor Slay said. "These individuals will pledge to be fair and objective and to make decisions based only upon the facts and evidence before them. They will be fair to citizens and police and protect their rights, ensure that civilians have a role in our police department, and increase transparency."

The COB Ordinance creates several qualifications for COB members including:

Not more than one member of the COB may be an individual who previously was a commissioned employee of a municipal, state, or federal law enforcement agency.

The timeline for the formation of the full board is as follows:

Mayor Slay signs Board Bill 208 into law, establishing a Civilian Oversight Board for the St. Louis Metropolitan Police Department.

Clerk of Board of Aldermen delivers names of qualified individuals recommended by Aldermen to Mayor Slay (Ordinance, Section 3, subsection   5.A).

2. Board of Aldermen takes vote on whether to confirm each nominee