Mayors Tucker and Schoemehl first took their oaths of office on April 21st (1953 and 1981, respectively). They were succeeded by Mayors Cervantes and Bosley, who were inaugurated on April 20 (1965 and 1993, respectively). 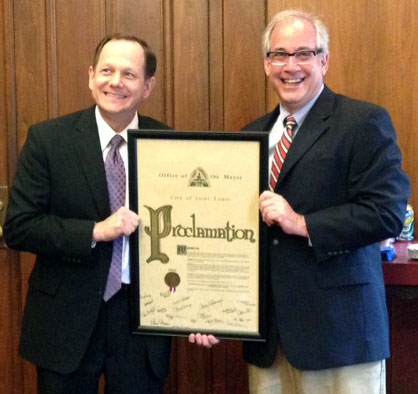 Mayor Slay deliveers many proclamations every year, so his staff thought it fitting that he receive one himself (signed by his staff), proclaiming Saturday, April 27, 2013 "With Francis G. Slay's Leadership, Today is a Day to Make History Day.
A mayor serves from the time he or she is elected and qualifies, until his or her successor is elected and qualifies. The days in office are counted from the date of inauguration, to and including, the date of his successor's inauguration. By that method; Mayors Tucker and Schoemehl each served 4,383 days.

From his inaugural day, to and including the day his successor qualified, Mayor Kiel served 4,393 days in office.