On the Map: Lewis Place

To commemorate Black History throughout the year, we will be sharing the stories of places in our city. 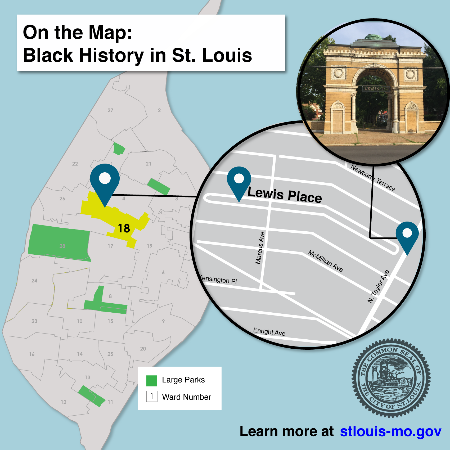 Too often the history of our city goes untold. The streets we walk down or houses we pass have a storied past that is all too often forgotten. To commemorate Black History this month and throughout the year, we will be sharing the stories of places in our city that in one way or another have been home to the rich history of Black St. Louisans.

To kick off the On the Map series, we begin with Lewis Place -- a street where the ingenuity and persistence of community members sparked powerful change in St. Louis and across the country.

In the 1890s, Lewis Place - a two-block street in North Central St. Louis between Taylor and Walton Avenues, was primarily owned and developed by the family of William J. Lewis, a prominent real estate family. Up through the Great Depression, the area was mainly populated by white families.

As part of the Great Migration, black Americans moved to Midwestern and Northern cities in large numbers in pursuit of industrial jobs and to escape the Jim Crow South. In the early 1900s, the number of black St. Louisans swelled, leading to a large backlash among some white St. Louisans. A citywide segregation ordinance overwhelmingly passed by public vote in 1916, officially legalizing racialized segregation. After the NAACP successfully defeated the law in court soon thereafter, many communities sought to maintain segregation through the use of restrictive covenants.

Restrictive covenants were legally enforceable agreements among white homeowners to not sell their homes to black Americans (as well as many other marginalized groups). Any homeowner who refused to abide by the agreement risked forfeiture of their property, ensuring that most homeowners would participate within and uphold a racially segregated system. Restrictive covenants deepened racial divides and wealth disparities in cities like St. Louis and solidified housing discrimination -- setting the stage for legal confrontation on Lewis Place.

The Witherspoons convinced fair-skinned black St. Louisans who could “pass for white” to buy homes in Lewis Place to gain control over the deeds of the properties. After enough homes were purchased in this manner, they collectively voted down the restrictive covenant on the street, allowing black St. Louisans to move into Lewis Place. The neighborhood earned its place in history and the civil rights movement, both locally and nationally. In 1980, it was placed on the National Register of Historic Places and remains the oldest private street owned by black St. Louisans.

The success of this action unleashed a groundswell of legal activism in St. Louis, eventually leading to the landmark Supreme Court case Shelley v. Kraemer which struck down restrictive covenants across the country.