Observe science at work and possibly recover launched payloads for a reward!

Residents around St. Louis may begin finding strange packages on the ground starting August 12th through mid-September. These packages are not dangerous and actually carry a $30 reward. They are part of a new NASA research program at Saint Louis University that involves launching weather balloons with small payloads of scientific instruments attached.

After ascending to 80,000 – 100,000 ft., the balloons burst and a parachute deploys, delivering the package safely back to earth. The white Styrofoam boxes with a white or blue cardboard box attached to one side are wrapped in duct tape to keep them securely closed during their flights. 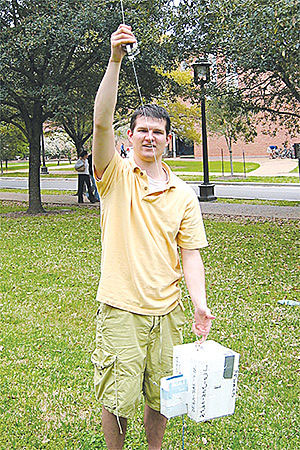 On the top of each is a piece of paper indicating, "REWARD OFFERED," and "THIS PACKAGE IS NOT DANGEROUS." A telephone number is also provided so that finders can get more information about the instruments, the project, and how it can be returned for a reward of $30. SLU will receive the data in real time via a transmitter on board the payload, so recovery of the instruments is not required. However, instruments that are returned can be reused.

Faculty and students from Saint Louis University's Department of Earth and Atmospheric Sciences will be launching 34 ozonesondes (weather balloons with ozone sensors) and gathering data as part of a NASA research program SEAC4RS (Studies of Emissions and Atmospheric Composition, Clouds and Climate Coupling by Regional Surveys).

The public can observe firsthand how this kind of air quality data is collected. The launches will take place near the Saint Louis Science Center's James S. McDonnell Planetarium in Forest Park at approximately 2 p.m. August 12th through mid-September. The data from each weather balloon launch can be viewed within 24 hours on the website:  SEACIONS.