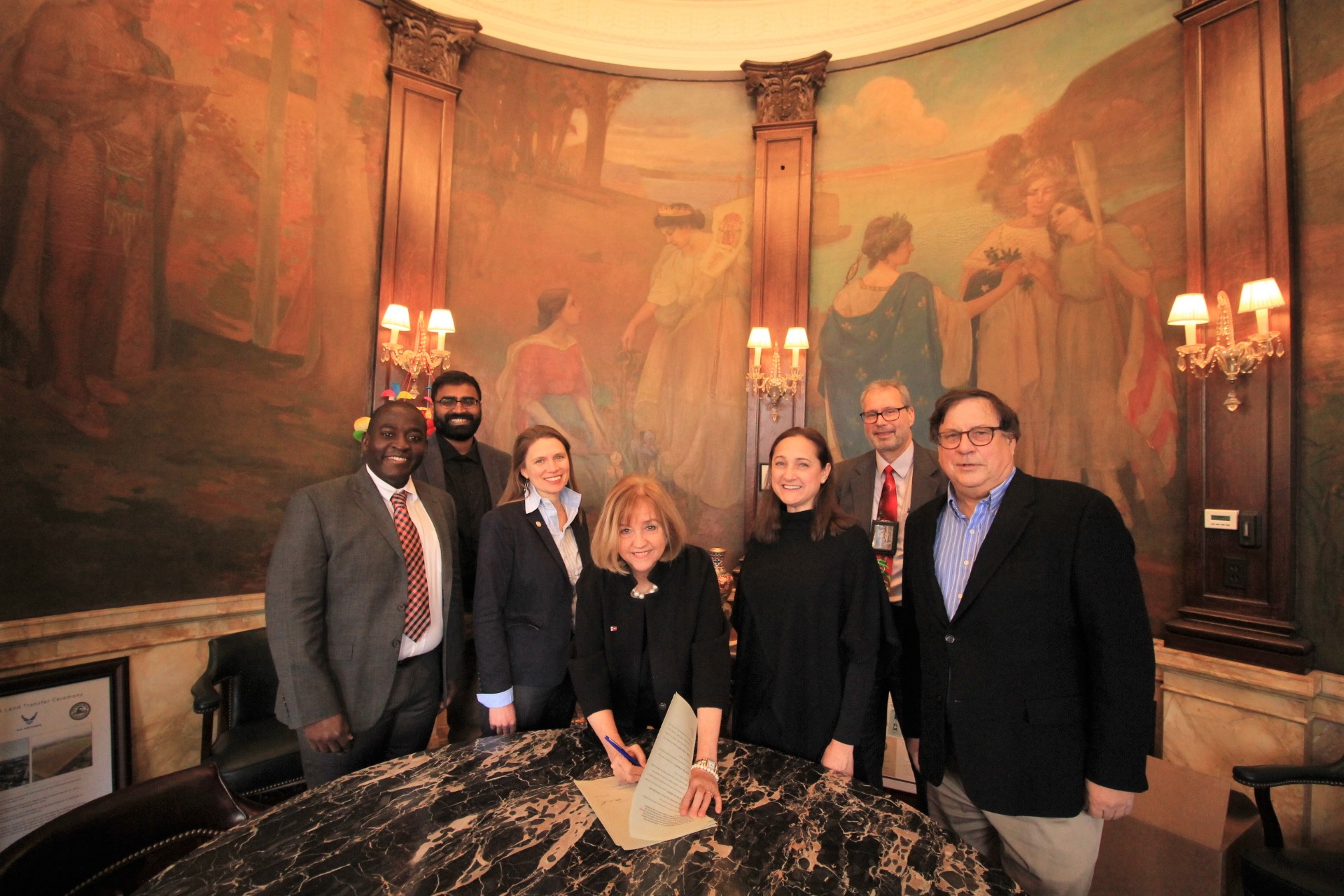 Mayor Lyda Krewson today signed important legislation that makes the City of St. Louis the first in the Midwest and the second in the country to require new construction to be “solar ready.”

Board Bill 146, which was sponsored by 28th Ward Alderwoman Heather Navarro, received unanimous approval by the full Board of Aldermen on December 13, 2019. It requires that new residential, multifamily or commercial construction in the City be designed in a way that can facilitate the installation of rooftop solar panels, in compliance with the 2018 International Energy Conservation Code.

“As Mayor, I want people to know that this Administration is taking the climate crisis seriously and meeting its challenges head-on, especially at the local level. That includes signing this historic solar readiness bill, which reflects that commitment. I extend my sincere thanks to all those who worked diligently together to make this legislation possible,” said Mayor Krewson.

The legislation, which takes effect immediately, aims to provide City residents with expanded access to the financial and environmental benefits of choosing solar power. That is because engineering a building to be solar ready is generally much easier and less expensive during the design phase of a project, as compared to retrofitting an existing structure.

“Up until now, it has been only the people who can afford the up-front installation costs of solar power who benefit from the lower electric rates. This bill levels the playing field and better positions City residents to take advantage of solar power,” said Alderwoman Navarro.

For buildings that are designed solar ready, a typical homeowner could save $4,000 on their solar installation and a commercial building owner could save $25,000. There are also important environmental benefits, as rooftop solar panels present an opportunity to reduce the amount of greenhouse gas emissions caused by generating electricity for buildings in the City.

“This new solar ready ordinance fits perfectly in the City’s progressive use of modern, up-to-date building codes that are cost-effective, keep the public safe and conscious of our environment,” said Building Commissioner Frank Oswald.

Catherine Werner, the City’s Sustainability Director, added, “It is a triple bottom line sustainability win for the City, and advances the City’s Climate Protection Initiative.”

The City is one of just 25 cities selected to participate in the Bloomberg American Cities Climate Challenge, which is an award that provides vital resources that enable cities to take strong climate action to improve air quality and reduce air population. With that critically important support from the ACCC, the City is taking bold action to reduce its carbon footprint across all sectors, including buildings and infrastructure.

The new solar readiness ordinance is the first piece of climate legislation passed by the City as part of the Climate Challenge.