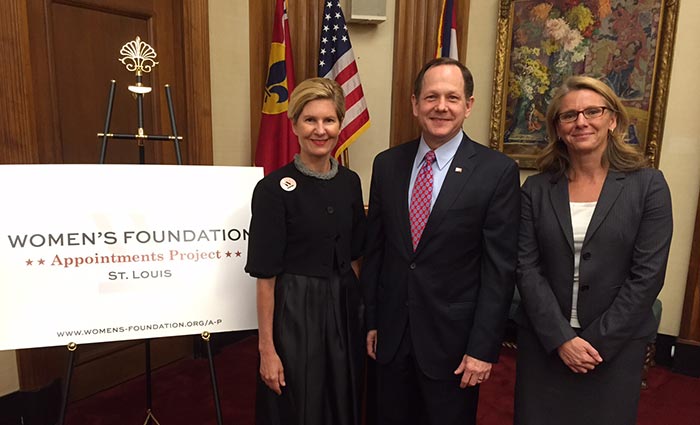 St. Louis, Mo – Today, the Women's Foundation and St. Louis Mayor Francis Slay announced a new partnership to increase the number of women serving on City boards and commissions. St. Louis will be the second city in Missouri to launch a Women's Foundation Appointments Project to advance more women into leadership positions, after a successful pilot project in Kansas City, MO, last year. As part of the event, Mayor Slay also announced the first appointment through the Women's Foundation Appointments Project – St. Louis, Bridget Halquist, who has been appointed to the St. Louis Firefighters' Retirement Plan Board.

"We are very pleased to partner with Mayor Slay and the City of St. Louis to launch another city-wide Appointments Project to enable more women to lead in their community," said Wendy Doyle, President and CEO of the Women’s Foundation. "At the Women’s Foundation, we work to remove barriers for women and their families, and we’re thrilled to expand this work to include Missouri’s two largest cities."

Currently, 31 percent of the 464 seats on St. Louis boards and commissions are held by women. The Appointments Project – St. Louis will work to identify good candidates for city leadership positions by increasing awareness of open board positions, connecting local talent, and helping women navigate the process. Past research on civic engagement conducted by the Women’s Foundation has shown that while women have the drive and the desire to serve on a board or commission, many feel like they do not have the knowledge or experience to do so. In addition, many women express they would serve, if they were asked.

"Several of my senior staff are women, including Chief of Staff Mary Ellen Ponder, and we would like to see more women represented on our boards and commissions," said Mayor Slay. “We’re proud to partner with the Women's Foundation to lead our region in encouraging more women to consider serving in these important roles and removing any barriers that may exist for them to do so,” said Mayor Slay. "Having more women in leadership positions will enrich and strengthen our city through increasing perspectives."

In addition to increasing the pool of potential applicants for the city and encouraging women to apply, the Appointments Project – St. Louis will include training sessions for interested board candidates in conjunction with the United Way of Greater St. Louis.

The first appointment through the Appointments Project – St. Louis was announced as Bridget Halquist, who was recently appointed to the St. Louis Firefighters' Retirement Plan Board.

"I am honored to receive the first appointment through the St. Louis Appointments Project. I am grateful to Mayor Slay and to the Women’s Foundation for their guidance in this process. I know many more women are waiting for the same opportunities that I’ve been given," said Bridget Halquist, an attorney and recent appointee to the St. Louis Firefighters’ Retirement Plan Board.