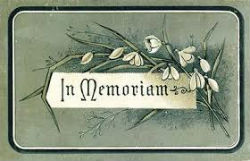 City Emergency Management Agency Commissioner Gary A. Christmann announced Monday via Twitter that CEMA lost a longtime employee, volunteer and close friend -- Charles "Charlie" Stevenson.  "Charlie was a fixture at CEMA, reporting to work each day, even after his retirement in 2003," Christmann tweeted.

Funeral arrangements for Charlie Stevenson are as follows: