City of St. Louis Department of Health Partners with Barbers and Hairstylists to  "Fade Out" Sexually Transmitted Infections

Efforts are underway to "Fade Out" sexually transmitted infections in the City Of St. Louis. 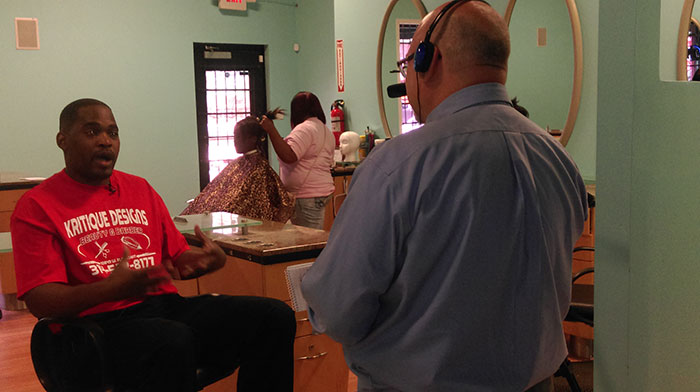 Efforts are underway to "Fade Out" sexually transmitted infections in the City Of St. Louis. Hairstylists in targeted areas in the City of St. Louis are partnering with the Department of Health (DOH) to raise awareness and spread prevention messages about sexually transmitted infections. Male and female stylists are educated by DOH staff so that they can share facts, debunk myths, and link individuals to resources. The program is called "Fading Out HIV," borrowing its name from the popular haircut.

The DOH modeled the initiative after a program created by the U.S. Centers for Disease Control and Prevention, called "Business Responds to AIDS/Labor Responds to AIDS (BRTA/LRTA)." This initiative provides an opportunity to reach segments of the population that might not be reached by traditional public health messaging.

Barber shops and salons are recruited based on epidemiologist data and willingness to participate. Barbers and stylists are then trained in HIV/STI 101, which includes a segment on how to initiate the conversation. Barbers and stylists are also armed with community resources so that they can make appropriate referrals, such as where they can send a client for testing and treatment. "Barbers and stylists already have rapport with their clients and have their attention for dedicated time periods so it’s a great opportunity," said Franda Thomas, MEd, Communicable Disease Program Manager for the DOH. Shops are also given free condoms for distribution.

The DOH also plans to increase education and awareness efforts to elementary, middle and high schools, as well as embark on a social media marketing campaign focusing on Women of Color in the near future.

Sexually transmitted infections, HIV/AIDS, Gonorrhea, and Chlamydia cases diagnosed in the City of St. Louis remain high, but have shown a decline between 2013 and 2014: