The city of St. Louis since 1990 has added more cyclists to its roadways than the vast majority of U.S. cities.

The city of St. Louis since 1990 has added more cyclists to its roadways than the vast majority of U.S. cities, according to a report by the League of American Bicyclists.

St. Louis ranked No. 7 in the U.S. for commuter cycling growth since 1990, racing past cities such as San Francisco, Denver and Minneapolis, all of which, in fairness, count a larger percentage of bike commuters. 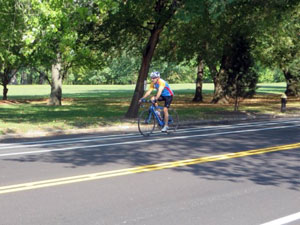 “The city has gone from not that much activity to a lot of activity,” Weiss said. “People are realizing that it’s a low-cost alternative. It’s sustainable. It’s green, and it’s community-based.”

Weiss said primary road systems in the city are not great for bikes, but there are usually secondary routes that run parallel. Those can be more accommodating for bikes, according to Weiss.

The city of St. Louis since 1990 has added more cyclists to its roadways than the vast majority of U.S. cities, according to a report by the League of American Bicyclists. 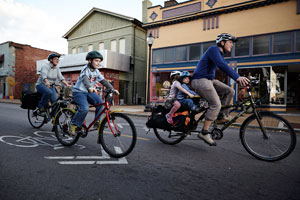 Partnerships between local governments and the biking community are also helping to boost bicycle commuters. One example is the Gateway Bike Plan, an effort between the Great Rivers Greenway District, the Missouri Department of Transportation, East-West Gateway Council of Governments, Metro and numerous municipalities.

Weiss also said opening up a commuter station downtown has encouraged more people to bike to work. The commuter station, located at 1011 Locust St., offers members more than 120 bike racks, showers and locker rooms. The station opened in 2011 and was supported by a $200,000 grant from the U.S. Department of Energy through the energy efficiency and conservation block grant program under the American Recovery and Reinvestment Act.

Weiss said the popularity of bicycling has been aided by several high profile races and charity events, most notably the St. Louis Gateway Cup and Pedal the Cause.

The fastest growing city, according to the League’s report, is Detroit, followed by Chicago, Washington, D.C., and Portland