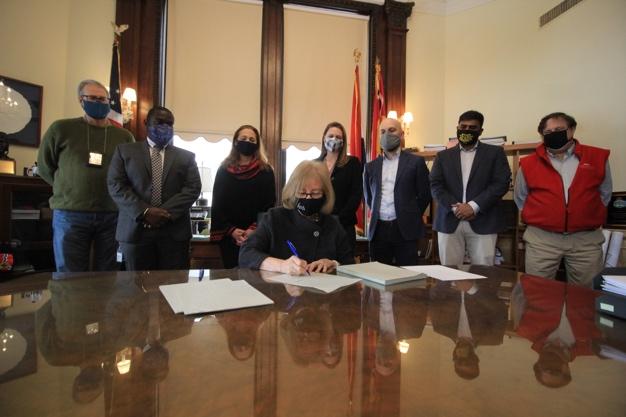 Continuing her nationally recognized commitment to bold climate action at the local level, Mayor Lyda Krewson today signed into law the most comprehensive electric vehicle (EV) legislation in the Midwest.

Board Bills 162CS, 163CS, and 181 are collectively designed to expand EV charging infrastructure across the City in preparation for more electric vehicles entering the market over the next few years. The Krewson Administration modeled the legislative package after successful similar initiatives in peer cities.

Beginning January 1, 2022, certain new construction and major renovations of residential, multi-family, and commercial buildings will be required to be EV ready by including accommodations for easy installation of EV charging capacity. Similar requirements will begin to apply to major rehabs of single-family units beginning January 1, 2024.

“It’s estimated that at least a quarter of all new vehicles sold by 2030 will be electric vehicles. This forward-looking legislation positions the City of St. Louis as a leader because we’re lifting one of the barriers to purchasing electric vehicles and preparing for them to hit our streets. Thank you to my colleagues at the Board of Aldermen and Mayor Krewson for supporting these measures,” said 28th Ward Alderwoman Heather Navarro, who sponsored the legislation.

Since electric vehicles are most frequently charged at home, certain residential construction under the new legislation will have to include the installation of an outlet that can facilitate charging.

However, capacity is also needed for workplaces and other destinations for EV users to top up. That’s why certain commercial construction under this legislation will have to include charging stations, the necessary charging equipment, and a varying amount of designated parking spaces to accommodate convenient charging. There are exemptions for some rehabs and building types or uses where EV charging is less appropriate.

“It’s much easier and saves you unnecessary costs to install electric vehicle infrastructure during a major renovation or new construction project, as opposed to stand-alone retrofits that can be quite costly and time-consuming. By taking this action now, we’re empowering the community to prepare and plan for the adoption of electric vehicle technology in a cost-effective manner,” said Frank Oswald, the City’s Building Commissioner.

Numerous positive benefits have been associated with the advancement of electric vehicles, such as lower air pollution and carbon emissions, workforce development opportunities for electricians, and nearly $7,000 in reduced operating costs over the lifetime of one electric vehicle. Today’s action by Mayor Krewson also advances the City’s ambitious climate protection goals of reducing greenhouse gas (GHG) emissions 100% by 2050 and move to 100% clean electricity by 2035.

“Electric vehicles in our state currently emit 33% less greenhouse gases than gasoline-consuming vehicles. With this legislation, we’re supporting the use of cleaner vehicles, which will result in cleaner air for us all to breathe. Vehicle electrification helps improve air quality, public health, and reduces our reliance on fossil fuels. It’s an all-around tremendous step toward advancing triple bottom line sustainability objectives,” said Catherine Werner, the City’s Sustainability Director.

As part of her ongoing commitment to meeting those objectives, Mayor Krewson also announced today that the City itself will be taking intentional steps to lead by example, including purchasing several electric vehicles and associated EV chargers to support municipal fleet operations. These purchases are being made with awards the City received from the Missouri Department of Natural Resources Volkswagen Trust Settlement Fund.

The City of St. Louis is one of 25 cities selected to participate in the Bloomberg Philanthropies American Cities Climate Challenge, an effort that provides vital resources to enable cities to take strong climate action to improve air quality and reduce air pollution. With this support from the Climate Challenge, the City is acting boldly to reduce its carbon footprint across all sectors.

The EV readiness represents another example of Mayor Krewson’s leadership as part of the Climate Challenge. She previously signed into law a Solar Readiness ordinance, a Building Energy Performance Standards ordinance, and facilitated a Solar Workforce Development Pilot program and the creation of the SiLVERS program, which will enable senior service programs to utilize electric vehicles when delivering to underserved neighborhoods across the City.