Jones signed Executive Order #1, which clarifies how citizen complaints regarding police and correctional misconduct are reviewed and managed. 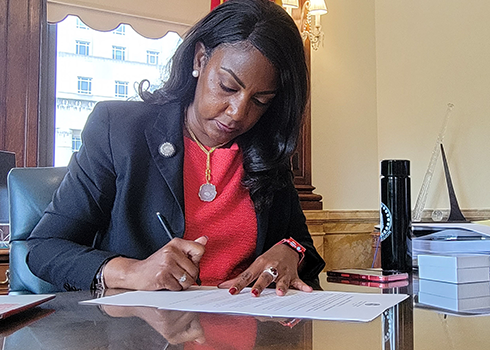 “These systems were built for abuse, not accountability. If we want to rebuild trust between our communities and the police department, we cannot allow the police to investigate themselves. This Executive Order creates a clear and direct line of authority between Internal Affairs and the Civilian Oversight Board,” says Mayor Jones."

In addition, Executive Order #1 demands the Department of Corrections deliver all complaints by detainees held in the City Justice Center and Medium Security Institution, dating as far back as 2017. Last weekend, after personally witnessing unsanitary and inhumane conditions inside both facilities, Mayor Jones spoke with detainees who expressed concerns about the carelessness by which Corrections staff handled their complaints. The records demanded in the Executive Order may be reviewed by the Mayor, Director of Public Safety, Commissioner of the Civilian Oversight Board, City Counselor’s Office, and Director of Personnel, as well as designated staff members.

St. Louisans who wish to file a complaint regarding police misconduct are encouraged to call the Civilian Oversight Board at (314) 657-1600.