Mayor Slay awarded the Levee Stone from The Partnership for Downtown St. Louis 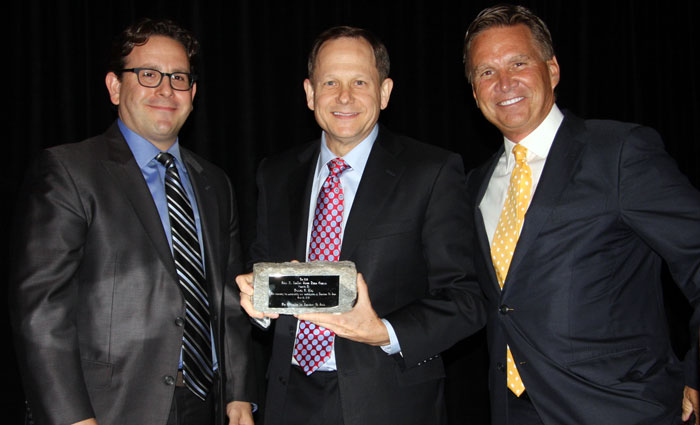 The Mayor graciously had this to say:

Thank you very much.

When I think about the past winners of this award, I am both humbled and honored that you think that my contribution to Downtown is even in the same league as theirs.

Previous winners like Ron, like Kathy Bader, Kit Bond and Tom Reeves, will forever be part of our history.

I am not just being humble when I say that many other people deserve to be here with me. Improving Downtown has been a team effort.

That's why I consider the the perfect symbol. Oneis useless except as a paper weight, or an award. But, a whole bunch of them carefully placed side-by-side makes something functional and beautiful.

Like one stone on a levee, I am just one of many people who are working hard to make Downtown more functional and more beautiful. Together, you and I, and a whole lot of other people are succeeding.

A little more than a decade ago, downtown was in trouble. So, we put together a plan. People scoffed. They said it was too late. They said the billion dollar investment goal was unrealistic. But, you believed. I believed. We all believed… and we were relentless. We did not take no for an answer.

We beat the odds and the expectations.When I took office, we had nearly 150 vacant buildings downtown.Today that number is fewer than 30. That happened in large part because of the state historic tax credit. People like Jerry Schlichter and Barb Geisman, who did the hard legal work, deserve much of the credit.

We have opened thousands of new apartments and condos, 2,500 new hotel rooms, hundreds of new restaurants, and now the rumble of grocery carts at Downtown's Culinaria and the sound of coming attractions at the MX.

Amazing places and spaces have been brought back to life or dramatically improved… including the Peabody Opera House, the Central Library, the MX, the Old Post Office, the Union Pacific building, and many more.

And, we're just getting warmed up.Just ahead are Ballpark Village, the Blues Museum, the St. Louis University Law School, and the Arcade Building.

Our citizens believe in what we are doing:businesses are renewing their leases and expanding; voters have approved a new tax levy for projects that include significant changes to the Arch and the Riverfront; downtown has become a neighborhood.

We have 7,000 new residents, making Downtown St. Louis the fastest growing neighborhood anywhere in the region.Apartments are leasing fast. Developers are taking on difficult projects like the Chemical Building and the Roberts Tower.

And it's easy to see why. Reinventing Washington Avenue, renovating the Old Post Office, and building a new ballpark have created destinations to live, work and play. Success breeds success.

City Garden, Central Library and the Peabody Opera House have created new places for people to explore, learn and appreciate the arts.

Above all else, we have recovered the optimism, momentum and enthusiasm that we had misplaced. We now know what we can do, and that we can do great things.

It is time to take our confidence and go to the next level. We have rebuilt Downtown. Now, we need to translate that success to more jobs.

Here is a roadmap.

We must make everyone feel comfortable. Crime is down dramatically in Downtown over the last five years. But, we have to do more. We have to both make Downtown safer for everyone at all times of the day and convince people that it is safer. Chief Dotson and I both pledge our full attention to make that happen.

We are a startup City.We are becoming a city of entrepreneurs, in no small measure because of Arch Grants and T-Rex.We need to build on the success of these programs by expanding them – and encouraging more of them.

More knowledge companies should be in the City and in Downtown.That is where they belong.We offer them the lifestyle their workers want.

But, we also have to make sure that we are not the farm team for other cities.When businesses grown in St. Louis are ready to go to market and create jobs, they do it in St. Louis—not Silicon Valley.

Companies like Lockerdome are making that work.Gabe and his wife Rachel have made their business and their home on Washington Avenue, and we couldn't be happier.We want them to stay downtown and grow downtown.

And to help other startups do just that, we've set a hundred million dollar goal to keep those companies, jobs and ideas in our City, and in our Downtown.

Those of you in larger companies have a role to play. I want you to ask your vendors to consider moving their operations Downtown.

City Hall has a job to do. We must look at our tax and regulatory policies to make sure they attract – and do nothing to drive away – knowledge workers and their bosses. We must make it more convenient to do business downtown. And, even more important than "more convenient," we have to make working in downtown more exciting than working anyplace else.

Finally, we need smart transportation. Parking needs to be more consistent, less confusing, more secure, and easier to use. But, cars are not the things around which our downtown should be built.We must have more alternatives to cars, better transit options, more bike lanes, bike sharing, better sidewalk signage, attractive storefronts, more shade, more shuttles, better lighting, more music and flowers, safer crossings for pedestrians and more of every possible amenity within an easy stroll.

Ladies and gentlemen, I am proud of what we have accomplished.  We have made a strong beginning.We have some great goals ahead.As each stone in a levee is anchored firmly by those that came before it and those that will come next, our path to reach those goals must build on what we have already accomplished.

That being the case, we are all levee stones, and I proudly share my stone with all of you today.