On the Map: Rosebud Cafe

A popular spot for St. Louis ragtime musicians at the turn of the twentieth century owned by Tom Turpin. 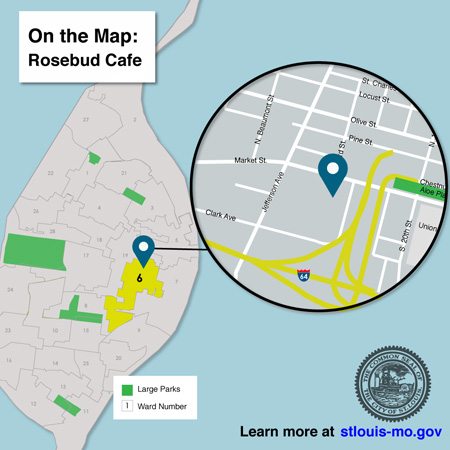 This edition of On the Map focuses on Rosebud Cafe, a popular spot for St. Louis ragtime musicians at the turn of the twentieth century owned by Tom Turpin.

Tom Turpin moved with his family from his hometown of Savannah, Georgia to St. Louis in the early 1880s. His father, “Honest John”, opened a saloon and eventually Tom opened his own establishment - the Rosebud Cafe.

Over time, the Rosebud Cafe became a hub for ragtime musicians including Scott Joplin and Joe Jordan and fans from the St. Louis area and around the country. This did not happen by accident. In addition to owning the cafe, Tom Turpin was a pianist who played and composed ragtime music. While he did not rise to the fame of other ragtime musicians like Joplin, Turpin was well known for the music he composed. With the composition of the “Harlem Rag,” Turpin became the first African American to publish a “rag” or ragtime song. Turpin went on to compose other ragtime hits including “St. Louis Rag,” “Buffalo Rag,” “The Bowery Buck,” and “A  Ragtime Nightmare.”

His music and the Rosebud Cafe earned Turpin the title of “Father of St. Louis Ragtime,” as noted on his tombstone in St. Peter’s Cemetery in Normandy, MO.

The original Rosebud Cafe was located downtown at 2220-2222 Market Street. A New Rosebud Cafe modeled after the original is now part of the Scott Joplin House State Historic Site at 2658 Delmar Boulevard.