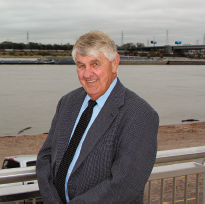 ST. LOUIS — It is with sadness that St. Louis Development Corporation (SLDC) announces the passing of Mr. Elmer “Nick” Nichols. Nichols was employed with SLDC for over 36 years as the Operations Manager for the Port Authority of the City St. Louis.

After graduating from the University of Tampa in 1958, Nichols joined the Air Force and was first sent to Dover, Delaware. He was a 24-year veteran of the United States Airforce, where he trained on fighter planes. Later Nichols served as a navigator on a number of cargo jets that were responsible for delivering supplies to the troops during the Vietnam War. He later completed a Master’s Degree in Aerospace Management and eventually relocated to Scott Air Force Base where he was tasked with evaluating flight crews, a position he held for 10 years.

He retired honorably as a Lieutenant Colonel in 1982 and shortly afterward went to work for St. Louis Development Corporation, which houses the Port Authority of the City of St. Louis. Otis Williams, Executive Director of SLDC said this about Nichols, “Nick was a dedicated member of our team for over 36-years. He was proud of the work that we do here, and he was committed to being a steward of the Port and its resources. If you had a question about the Port, you went to Nick.  We are extremely sad about his passing, and we will miss him.”