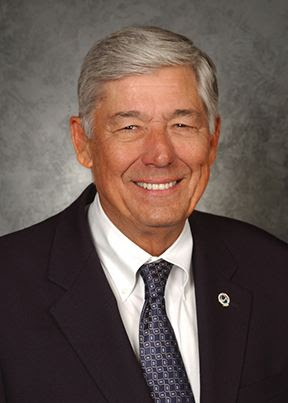 “This is a great loss for this region and the aviation community,” said St. Louis City Mayor Francis Slay. “Dick Hrabko truly set the foundation for this Airport’s turnaround helping weather the impact of American Airlines’ de-hubbing of its operations, pushing forward a major airport renovation plan and re-organizing the leadership structure of the airport.”

“He was so widely respected across the state and throughout aviation,” said Airport Director Rhonda Hamm-Niebruegge, who succeeded Hrabko in 2010. “He really brought a private-sector, business oriented vision to the Airport by shifting a focus to the airport’s ability to leverage non-aeronautical development to help the airport sustain better financial stability.”

While American Airlines announced more drastic airline service cuts in 2009, Hrabko helped the STL immediately renew service to some key markets on other airlines. He also pushed forward a $70 million renovation plan that modernized Terminal 1 and its concourses and was completed in 2014. As a Commissioner representing St. Charles County on the 17-member St. Louis Airport Commission, he offered tremendous expertise and industry guidance as the Airport has grown flights, improved terminal facilities, improved passenger amenities, and has created a new focus on cargo and other non-aeronautical projects.

Dick recently received the Lifetime Achievement Award from the Missouri Airport Managers Association for his dedication, leadership and never ending promotion and support of aviation.

St. Louis Lambert International Airport (STL) is the primary commercial airport for eastern Missouri and southern Illinois serving 14 million passengers annually. STL is an Enterprise Fund Department of the City of St. Louis. It is wholly supported by airport user charges. No general fund revenues are used for the operation, administration, promotion or maintenance of airport facilities. For more information on flights and services at St. Louis Lambert International Airport, log ontowww.flystl.com.