This study aims to identify and update risk and protective factors for intimate partner homicide in order to develop prevention interventions. 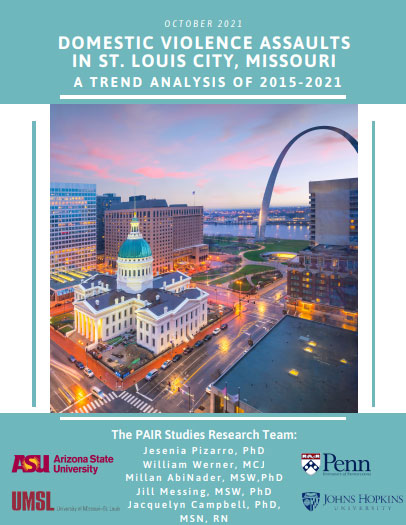 The incidence of domestic violence may have increased since March 2020 due to Corona Virus Disease 2019 (COVID-19) pandemic mitigation strategies, such as shelter-in-place policies that asked citizens with non-essential jobs to stay at home to curb the spread of the virus. As a result, trend analyses are necessary in order to uncover if incidents of domestic violence have indeed increased in the recent year.

Incidents of domestic violence appear to be increasing in St. Louis City during the past year (Farzan, 2020). As a result, the PAIR Studies team was approached by representatives from the City of St. Louis Mayor’s Office in late summer and asked to conduct a trend analysis of domestic violence incidents in the city. Data at the incident level of all assaults reported to St. Louis City Police Department with information on incident place and assault types were provided for the years of 2015 to 2021.

The current report contains findings from the analyses that were undertaken. The report consists of three sections. The first section details the methodology for the analyses. The second illustrates findings from the trend analyses. Three types of analyses are discussed: a specific analysis on victim offender relationship for 2021, number trend by district, and spatial heat analyses. The final sections consists of a list of recommendations based on the findings with a focus on possible avenues for prevention.