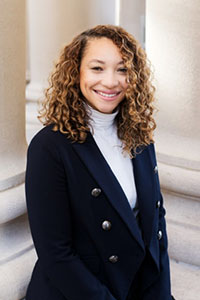 Mayor Tishaura O. Jones announced the appointments of Dr. John A. Wright, Sr. and Brittany Hogan to the St. Louis Board of Education following the resignations of members Dr. Joyce Roberts and Regina Fowler in April.

“Following the resignations of two members, continuity, diversity, and collaboration on the Board of Education are key to moving forward and providing a better future for St. Louis students,” said Mayor Tishaura O. Jones. “With backgrounds in social work, equity, as well as school administration, these two accomplished leaders represent these values well. I look forward to working alongside the full Board to improve schools and educational opportunities for families across St. Louis.”

Brittany Hogan is a social worker with vast experience in promoting diversity, equity, and inclusion (DEI) within the education system. Prior to accepting her current position as Manager for the Center for Human Service Leadership, a partnership between Washington University's School of Social Work and Delmar DiviNe, she served the Rockwood School District for eight years supporting the district’s DEI initiatives, including monitoring transportation and educational outcomes for more than 1,400 St. Louis City children utilizing the Voluntary Transfer Student Program (VTS), coordinating the district’s social workers, and promoting cultural competence in academics. Hogan holds a Master’s Degree in Social Work from Washington University in St. Louis and a Bachelor of Arts in Psychology from Hampton University.

“I am honored to be appointed to the Board of Education by Mayor Jones,” said Brittany Hogan. “I look forward to joining my new colleagues to help make sure every student in the SLPS community can succeed and thrive.”

Dr. Wright has a long and distinguished career as an academic leader in the St. Louis region. His previous jobs include serving as the Superintendent of the Kinloch School District, and interim Superintendent of St. Louis and Normandy Public School Districts. Dr. Wright is also a published author of seventeen books, and currently serves on the boards of the Mercantile Library and St. Louis Missouri-Senegal Sister Cities Committee, and as Honorary Consul for the Republic of Senegal for Missouri. Wright holds a PhD and MED from St. Louis University as well as a Bachelor of Arts from Harris Teachers College, now Harris Stowe State University. He is a St. Louis native who graduated from Sumner High School.