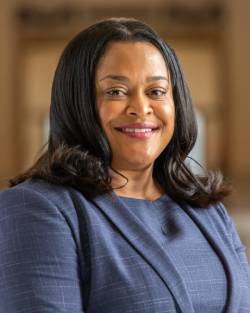 “Sheena Hamilton will be the first Black woman to serve the people of St. Louis as City Counselor,” said Mayor Tishaura O. Jones. “I am excited to bring on another talented professional and add her experience in private practice, corporate law departments, and government to this administration.”

Currently an equity partner at Dowd Bennett LLP, Hamilton serves as client manager for multiple Fortune 100 companies and government or quasi-government offices by managing litigation, investigations, budgets, staffing and compliance. Prior to joining Dowd Bennett, she clerked for the Honorable Catherine D. Perry of the United States District Court for the Eastern District of Missouri. She also has served as an adjunct professor at her alma mater, Saint Louis University School of Law, and is a member of the Board of Directors for the United Way of Greater St. Louis and of Alpha Kappa Alpha Sorority, Incorporated – Gamma Omega Chapter. Hamilton concluded a three-year term on the Board of Governors for the American Bar Association (ABA) in August 2021 and, before her ABA Board service, served multiple terms on the executive boards for the Mound City Bar Association and Women Lawyers Association of Greater St. Louis locally. She has been awarded the Women in Justice Award, Litigation Practitioner in 2017 by Missouri Lawyers Weekly and the John C. Shepherd Professionalism Award in 2019 by the Bar Association of Metropolitan St. Louis.

“I am honored to have the opportunity to serve St. Louis in this position,” said Sheena Hamilton. “I look forward to working with lawyers in the Office on the critical issues facing our community during this historic time.”

The City Counselor is the chief attorney for the entire City of St. Louis, overseeing two deputy city counselors, 38 attorneys and 20 support staff. Mayor Jones recently announced the appointment of Dr. Mati Hlatshwayo Davis as incoming Director of the City of St. Louis Department of Health earlier this month.