Mystery Artist Behind Creations in Philadelphia Wireman Exhibit at Lambert

The exhibit features 20 intricate wire sculptures from the collections of two galleries.

They are small, tightly coiled objects of found art, but they are woven with creative history and mystery. The Lambert Art and Culture Program has opened a new exhibit, “Philadelphia Wireman,” in the Terminal 1 Ticketing Lounge, on display through June 2015. 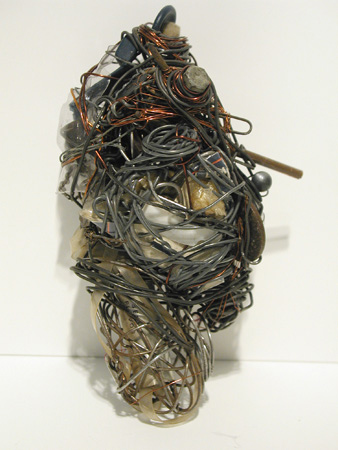 The exhibit features 20 intricate wire sculptures from the collections of two galleries: Fleisher/Ollman Gallery of Philadelphia and the William Shearburn Gallery of St. Louis. The pieces come from a discovery in Philadelphia in the early 1980s. Hundreds of these wire-figure creations, which resemble the human body or architectural motifs, were left abandoned in an alley. The creator is unknown but is believed to be a man who may have scavenged for all the elements of his art from the streets. Since then, the mystery artist’s work has been exhibited around the world. This is one of the rare times that parts of the collection have been viewed out of a museum or gallery setting.

Experts believe the collection is one of the greatest examples of self-taught art, with figures that have heavy associations with Native-American, African-American and even classical art themes. With wire as the primary material in the pieces, the artist also included other found material such as foil, plastic, newspaper, batteries, hinges and matchbooks.

The Lambert Art and Culture Program sponsors both temporary exhibitions and permanent art installations with a mission to enhance the visual impression of the Airport and support the arts in the St. Louis region.