Administrative Assistant to the Mayor 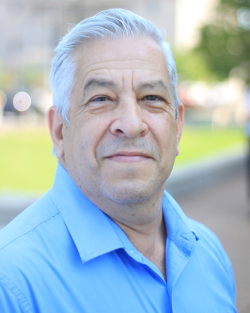 Andrew, originally from Albuquerque New Mexico started with the city in January of 2000 as an Operator at the Citizens’ Service Bureau where he assisted Citizens with their request for city services. Becoming well versed in City operations he became lead operator soon after. In 2008 He joined the Neighborhood Stabilization Team as a Customer Service Rep II where he assisted the director and Neighborhood Improvement Specialist with day to day activity. In 2009 he was promoted to Neighborhood Improvement Specialist where he used his knowledge of city service and ordinances to assist the residents of his ward. He was appointed by Mayor Krewson in May of 2019.

In his free time, he enjoys singing with the Gateway Men’s Chorus, movies and tennis.