The shiny green Emerald Ash Borer is responsible for destroying hundreds of thousands of Ash trees. 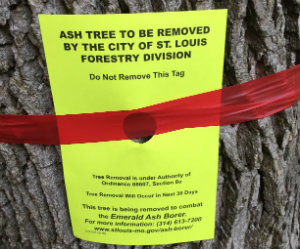 ST. LOUIS -- The shiny green Emerald Ash Borer is responsible for destroying hundreds of thousands of Ash trees and recently has been discovered in the City of St. Louis. The City's Forestry Division has been preparing for the eventual onslaught of these destructive pests, which have been moving across the country from east to west over more than a decade.

The bug, Agrilus planipennis, or simply called "EAB" for short, is an invasive wood-boring pest that kills all types of Ash trees. A dead Ash tree is a public safety risk, as it is more likely to break and fall, especially during storms. EAB only affects Ash and Fringe tree, a related genus, and is not a threat to any other type of tree. Unfortunately, Ash is the most common tree along St. Louis streets and is also a common landscape tree.

The Forestry Division has mapped more than 15,000 public Ash trees along City streets and parks. Crews will begin treating large, healthy Ash trees before they can become infected with the bugs, while removing thousands of others before they die and become dangerous.

In the coming weeks, residents may begin to notice bright yellow tags on Ash trees that must be removed (see attached photo). Residents can see where Ash trees are located by visiting the website Show MO Trees.

Kincaid has chosen an organic botanical compound that is effective in fighting the insect, which burrows through tree trunks and kills Ash trees from the inside. This option provides control of EAB, but protects the public and is consistent with the City's program of enhancing pollinators.

While some trees will receive treatment, most will be removed over a five-year period. Kincaid describes EAB as "the ice storm that lasts several years."

"We are well equipped to handle EAB and have been preparing for it since before the pest was first reported in Missouri in 2008. Being proactive allows us to determine the best course of action," Kincaid said. "That includes treating some trees, removing others, and above all, replanting a wide diversity of tree species.

"Some City streets and neighborhoods will see a dramatic reduction in the number of trees along their streets. This is the reality of invasive pests and provides even more emphasis on the need to have a diverse population of trees to reduce the dramatic impacts of invasive pests."

The City is committed to replanting the trees that are lost, often in the same spot where Ash trees will be removed. Grant money, along with City funds made available to aldermen each year will be used to pay for replacement trees.

The City is partnering with local community forestry non-profit Forest ReLeaf of Missouri to assist with securing grants and communicating directly with neighborhoods affected by the Ash tree removal.

The Ash trees that are removed will be composted at a City-operated site. Kincaid said, "We hope some folks will take note of this so that some local markets might emerge to use the logs for lumber and other wood products."

The City has listed its EAB Strategy online, including answers to common questions and the map of Ash street tree locations.

We're lucky to have Skip Kincaid, a Master Arborist, leading the effort against the Emerald Ash Borer. pic.twitter.com/AiIXQxkViX