Office on the Disabled

News, and announcements, and galleries from the Office on the Disabled

The Office on the Disabled would like to congratulate Adam Pearson on being honored by Washington University for earning the Emerging Leader OT Program Alumni Award for their Centennial year. This award honors those who have shown extraordinary leadership in their career and who have graduated after 2000. The Office on the Disabled is honored to have Mr. Pearson be a member of our Advisory Council.

Pearson is recognized for his leadership in our community and his dedication to supporting the mental health and well-being of the chronically homeless population in St. Louis.

Gina Hilberry, AIA LEED AP, chairperson of the Office on the Disabled's Advisory Council has been elected Vice Chair of the Accredited Standards Committee A117 on Architectural Features and Site Design of Public Buildings and Residential Structures for Persons with Disabilities!

This is the committee that considers accessible design standard modifications for building codes that eventually get adopted around the country. The City and County of St. Louis, as well as many other jurisdictions have adopted the 2003 version of ANSI A117. We are so fortunate to have such a tireless advocate in St. Louis! Congratulations Gina!

"The greatest thing about Max was his creativity," says David Newburger, a lawyer, Commissioner on the Disabled for the City of St. Louis and one of Starkloff's closest friends. "He saw issues and things that today are obvious, but they weren't then. There he was, stuck in a nursing home, and he developed independently the idea that he would move out into the community, live in an apartment, marry his sweetheart and have a job. He didn't want to spend his life in a place where other people made the decisions for him. He was fiercely independent."

Mayor Francis Slay said in a statement: "[Starkloff's] life was the stuff of a great movie....He was an example of living a full life as a person with a disability. The designs and operating practices of the City's public buildings, Metro, the St. Louis Zoo, and Busch Stadium reflect his advice, solicited and otherwise. He cannot be replaced, only remembered." 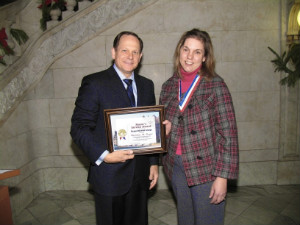 Each year, Mayor Francis Slay honors those City employees who are making clear and significant contributions to the City and providing exemplary service to City customers.

We in the Office on the Disabled are proud to announce that our very own, Christine Boyer, has been selected to receive the Mayor's Service Award in the category of Departmental Image for 2010.  It is clear that Christine makes a special effort to go beyond what is expected to assist those who use our services.

The Office on the Disabled is happy to announce that we have acquired JAWS Screen Reader Software.  Developed for computer users whose vision loss prevents them from seeing screen content, JAWS reads aloud what is on the PC screen.  It is our hope that this will assist the drafters and designers of the City's website in making their screen productions more accessible for everyone.

The Office on the Disabled would be happy to demonstrate the software to anyone interested in IT or the web, so that they can understand how their work appears to the blind.  It will hopefully help drafters and designers think about how to improve their screen productions both on and off the web.

In addition, the Office on the Disabled provides a Sorensen Video Relay that is available to citizens who wish to use this communication device in order to have access to sign language interpreters during business hours Monday - Friday.

Office on the Disabled Advisory Council

An accessible City for all.

Advise the Mayor, the Board of Aldermen, the Director of Human Services and the Commissioner on the Disabled as to the welfare of people with disabilities in the City of St. Louis. Review and make recommendations on matters presented to the Council for comment.

Should citizens wish, they can e-mail questions / comments through the home page of the Office on the Disabled. The field that needs to be filled out in order to send an e-mail is located in the bottom right of the home page.