City of St. Louis and Residents Continue to Respond to Storm Damage 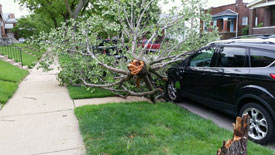 ST. LOUIS -- Clean up continues throughout the City of St. Louis following the storm on Wednesday, July 13, 2016, which produced 70 mph wind gusts.

The City's Citizens' Service Bureau received and processed nearly 500 calls for service. Police and fire were instrumental in responding to storm-related fires and reports of downed wires to keep the public safe. Damage to street trees and park trees was extensive. Forestry, Streets and Refuse crews have been working around the clock since Wednesday evening to clear right of ways and remove fallen City trees and debris.

Residents can dispose of their private tree debris by using the yard waste containers and/or regularly scheduled bulk pick ups provided by the Refuse Division, or they may drop off tree debris at one of the following locations:

"The fact that 98 percent of all known road blockages and critical needs were addressed by Wednesday night is a testament to our relentless City workers," Mayor Francis Slay said. "I want to encourage residents to continue to use our Citizens Service Bureau online or over the phone to report any issues."

Submit or check the status of service requests with the Citizens' Service Bureau, or by phone at (314) 622-4800, and on twitter @stlcsb.