Jones announced Fredrecka McGlown as director of the St. Louis Agency on Training and Employment and Betherny Williams as Streets Department Director. 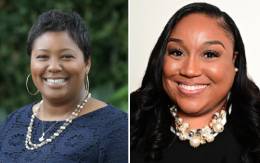 Today, Mayor Tishaura O. Jones announced the appointment of Fredrecka S. McGlown as director of the St. Louis Agency on Training and Employment (SLATE) and Betherny Williams as Streets Department Director. Williams will be the first Black woman to lead the Streets Department, and both individuals will start within the next two weeks.

McGlown will bring more than 10 years of experience in creating, managing, executing, and supporting programs that positively impact the lives of youth through education, employment, and training in an effort to eradicate barriers and behaviors that temporarily inhibit their success. A St. Louis Business Journal 30 Under 30 Award recipient, McGlown has received The Legacy Award from the National Council of Negro Women Gateway Metropolitan St. Louis Chapter, The Young Women on the Move in the City of St. Louis Award from the University of Missouri-St. Louis, Outstanding Service Award to the St. Louis Community from Delta Sigma Theta Sorority, Inc. McGlown is a graduate of the University of Missouri-St. Louis and received a Master’s degree from the institution. She is a proud native of East St. Louis, Illinois.

Betherny Williams comes to the Streets Department after 17 years at the Missouri Department of Transportation. Currently an Area Liaison for North St. Louis County, Williams oversees the prioritization of projects, future planning of projects, traffic improvement and daily maintenance operations addressing big-picture issues of design, construction, traffic, maintenance, and mobility. She has managed projects totaling over $655 million in taxpayer’s dollars. Williams is a 2019 Graduate of Missouri Way and 2017 Graduate of the MoDOT Statewide Accelerated Leadership Development Program, and served as MoDOT’s Statewide Employee Advisory Council Chairman, representing 8,000 employees. She was also selected to represent the department at the National Society of Black Engineers, 2017 National Convention as a workshop presenter. Williams holds a Bachelor of Science in Civil Engineering from Southern University.

Other recently announced appointments by Mayor Jones include Sheena Hamilton as St. Louis City Counselor, Dr. Mati Hlatshwayo Davis as Director of the City of St. Louis Department of Health, and Jennifer Clemons-Abdullah as Corrections Commissioner.