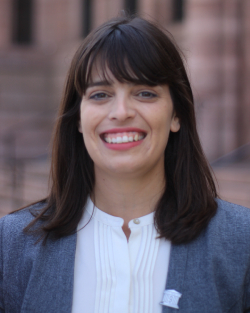 Sara Baker (she/her) serves as Deputy Chief of Staff for Mayor Jones. Previously, she worked as the Legislative and Policy Director for the American Civil Liberties Union of Missouri. She was responsible for the organization’s under the dome strategy, community outreach efforts, and affiliate communications. Sara is also the co-founder of a tech startup which specializes in legislative analytics and was the proud 2019 winner of an Arch Grant.

Prior to her work at the ACLU of Missouri, Sara was a Special Projects Manager and Stephen M. Rivers Memorial Fellow at the Center for Democracy in the Americas in Washington D.C. where she provided research on the role of women in Cuba’s evolving economy and worked directly with high-level congressional delegations to the island.