Prevention, mitigation, preparedness, response and recovery are the five steps of Emergency Management. 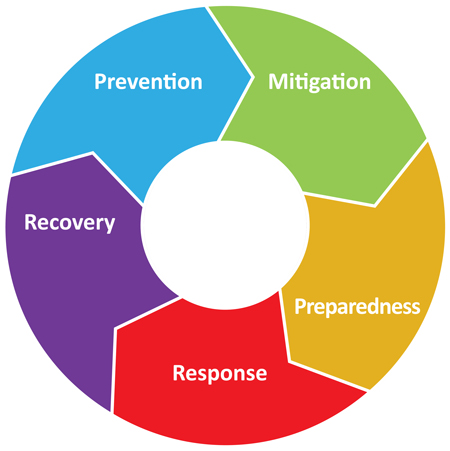 Actions taken to avoid an incident.  Stopping an incident from occurring.  Deterrence operations and surveillance.

Refers to measures that prevent an emergency, reduce the chance of an emergency happening, or reduce the damaging effects of unavoidable emergencies.    Typical mitigation measures include establishing building codes and zoning requirements, installing shutters, and constructing barriers such as levees.

Actions carried out immediately before, during, and immediately after a hazard impact, which are aimed at saving lives, reducing economic losses, and alleviating suffering.
Response actions may include activating the emergency operations center, evacuating threatened populations, opening shelters and providing mass care, emergency rescue and medical care, fire fighting, and urban search and rescue.

Actions taken to return a community to normal or near-normal conditions, including the restoration of basic services and the repair of physical, social and economic damages.  Typical recovery actions include debris cleanup, financial assistance to individuals and governments, rebuilding of roads and bridges and key facilities, and sustained mass care for displaced human and animal populations.