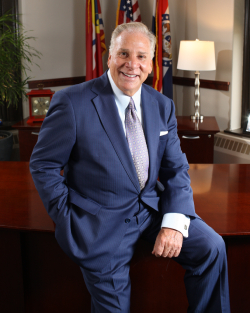 Gregg was elected as Collector of Revenue in 2006 after serving as the License Collector for the City of St. Louis since January 1998. Gregg and his team are serious about respecting taxpayers and the dollars they provide for vital City services. Over the past few years, Gregg has led the implementation of many service enhancements, special offerings and conveniences designed to make working with the Collector’s office easier for taxpayers. Gregg has earned a reputation for reducing bureaucracy and increasing efficiencies within the office by streamlining processes and cross-training employees, among other notable improvements.

Throughout the years, Gregg has also been very committed to numerous charitable organizations throughout the community. Gregg serves on the Jefferson National Parks Commission and he is Co-Chair of the Habitat for Humanity Golf Tournament. Recently he has worked to help organize canned food drives for homeless families in the metro area. He is active in "Festival of Nations" in Tower Grove Park, the Annie Malone Parade, Immaculate Heart of Mary Parish Picnic Parade, Gay Pride Parade, the Downtown and Dogtown St. Patrick’s Day Parades, Mardi Gras Parade, and he and his team regularly participate in the Komen Race for the Cure, raising thousands of dollars to help find a cure for breast cancer.

Gregg grew up in the Immaculate Heart of Mary parish in south St. Louis and graduated from Augustinian Academy. He graduated from Benedictine College in Atchison, Kansas where he earned a bachelor’s degree in Social Sciences. After proudly serving in the National Guard from 1971 - 1977, Gregg returned to St. Louis and went to work as a policy aide for three Aldermanic Presidents including Tom Zych, Tom Villa, and Francis Slay.

4 comments from people like you have helped us improve this page. Keep the feedback coming!