Cardiovascular disease (CVD) is a group of disorders involving the heart and blood vessels. CVD is the leading cause of health problems in the United States.

Cardiovascular disease (CVD) is a group of disorders involving the heart and blood vessels. CVD is the leading cause of health problems in the United States. In 2019, 48% (121.5 million) of the adult population had at least one CVD condition, and 46% of the population was estimated to have hypertension. (3) One out of every four deaths result from CVD, and about 2 in 10 CVD deaths occur before the age of 65. (1)

Many Americans have risk factors for CVD, which include obesity, physical inactivity, high blood pressure, cigarette smoking, high cholesterol, unhealthy diet, excessive alcohol use, and diabetes. Other factors such as age, race-ethnicity, and gender also put people at a higher risk for CVD. Ninety percent of individuals over the age of 80 have some form of CVD.

The public health impact and economic burden of CVD is enormous. In 2018, it was estimated that CVD costs the U.S. healthcare system $214 billion per year and results in losses in productivity of over $138 billion. (3) 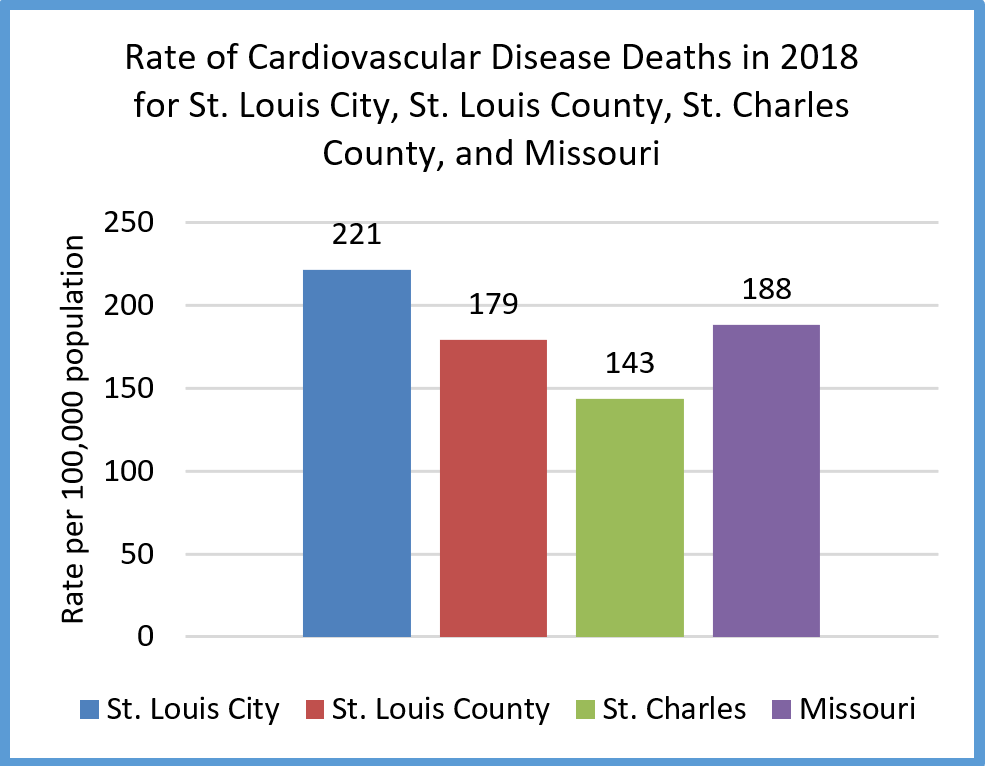 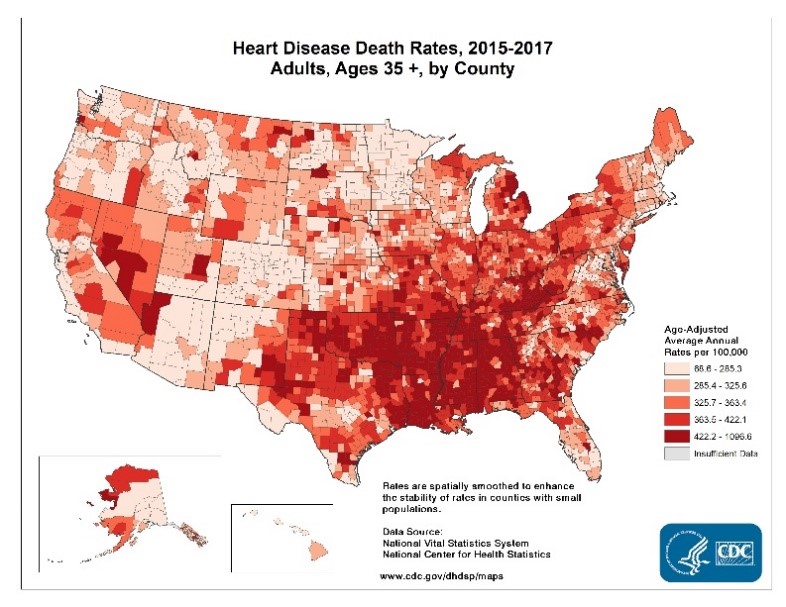 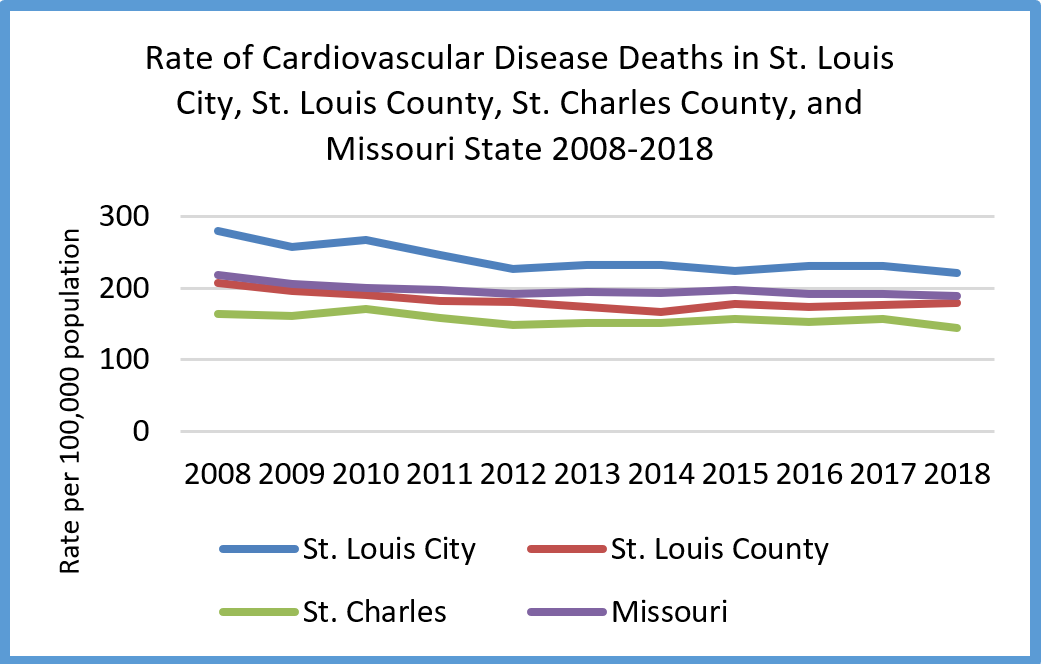 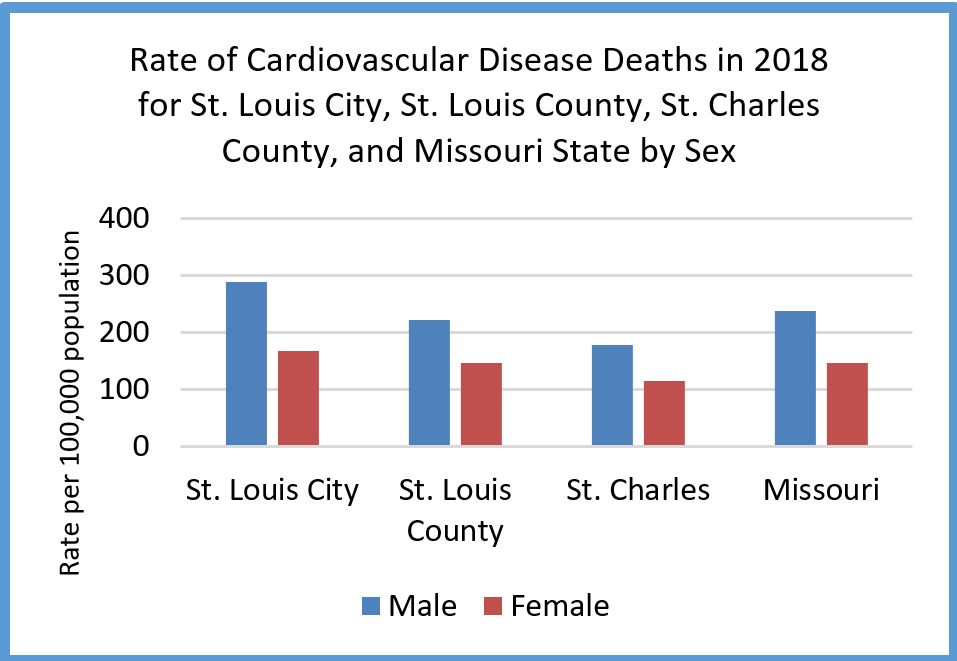 Racial disparities exist amongst CVD death rates, disproportionately affecting Blacks/African Americans more than Whites. The CVD death rate in 2018 among Black residents in the City of St. Louis was 265 per 100,000, compared to White residents with 194 per 100,000. (2) The health disparity among racial and ethnic groups is also observed at both state and national levels. The burden of CVD in the City of St. Louis may be ascribed to a high number of residents with unhealthy lifestyle choices, such as inactivity, smoking, and unhealthy diets, which constitute major risks for CVD. Based on 2020 data, 34% of adults in St. Louis City are obese, 25% of adults are smokers, and 26% of residents do not engage in any leisure-time physical activities. Also, the diet quality/food environment index for St. Louis residents is 6.0/10. (4) These health indicators help explain why St. Louis City ranked poorly compared to other counties and the state. Other contributory factors are medical conditions such as diabetes, high blood pressure, and high blood cholesterol, which are also high in St. Louis City. Having one of these medical conditions increases the risk of suffering from CVD.

What Are Health Departments Doing to Reduce Cardiovascular Diseases?