Mental disorders or illnesses are defined as conditions involving changes in emotion, thinking and/or behavior. Mental disorders are associated with distress and/or problems functioning in social work or family activities. 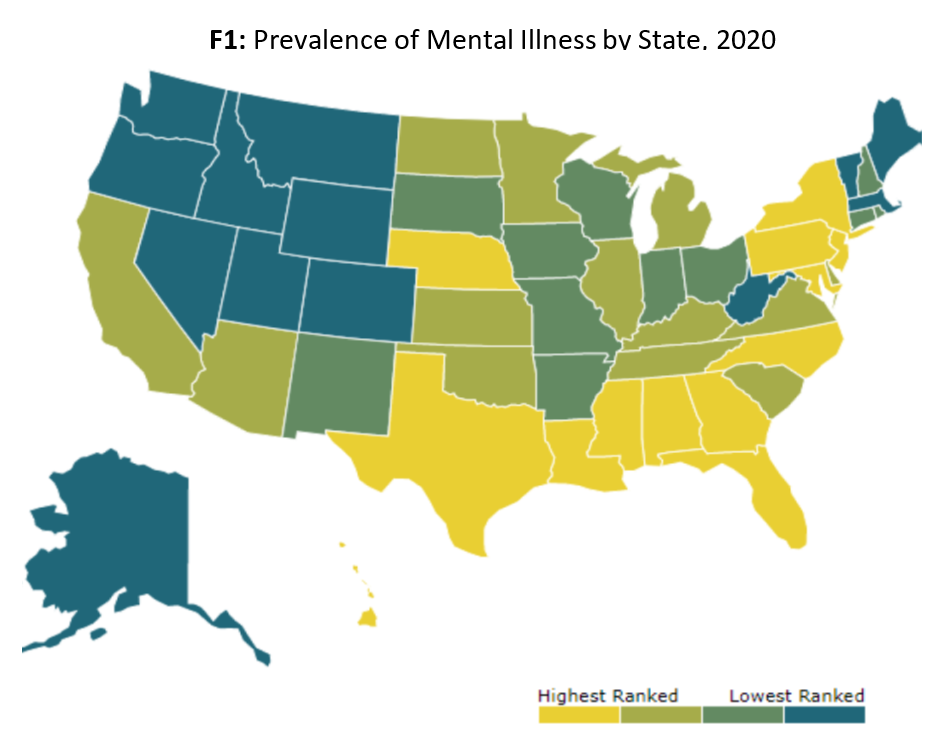 Mental disorders or illnesses are defined as conditions involving changes in emotion, thinking and/or behavior. Mental disorders are associated with distress and/or problems functioning in social work or family activities. (1) According to the American Psychiatric Association, nearly one in five (19%) U.S. adults experience some form of mental illness; one in 24 (4.1%) has a serious mental illness, and one in 12 (8.5%) has a diagnosable substance use disorder. (2) In 2020, 4 in 10 adults reported depressive or anxiety-related symptoms, increasing from one in ten adults in 2019. The most prevalent conditions that affect adults include depression, schizophrenia, bipolar disorder, anxiety disorders, posttraumatic stress disorder, obsessive-compulsive disorder and borderline personality disorder . Missouri is ranked number 31 in order of mental illness prevalence by state [F.1]

This brief summarizes 2020 data from the Division of Behavioral Health mental health services and hospital admissions. These are reliable sources for estimating prevalence rates and risk factors regarding mental health in the City of St Louis compared to figures in the St. Louis County and the State of Missouri. 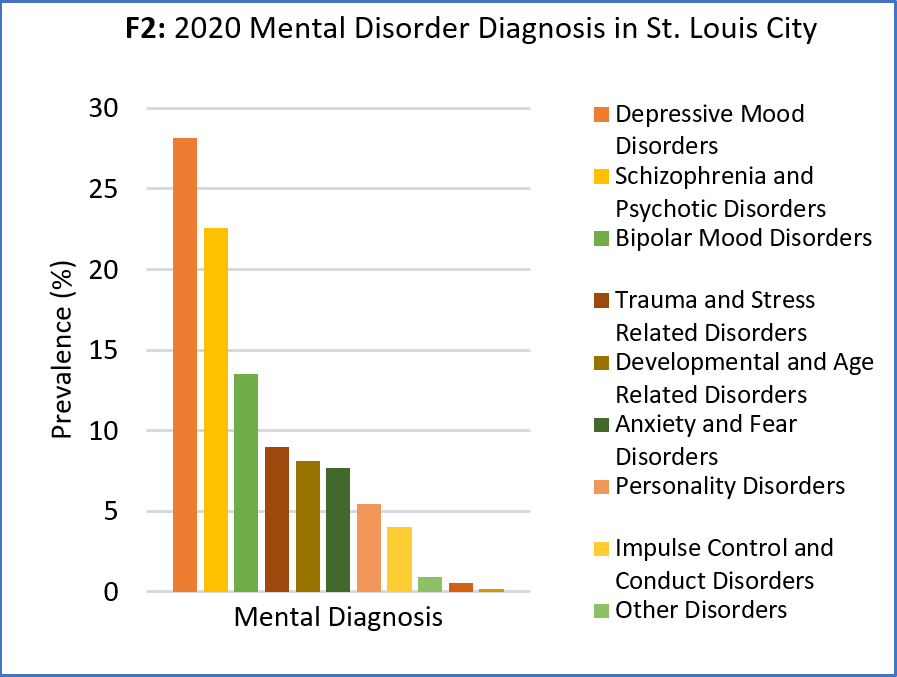 St. Louis City has the highest prevalence rate of mental health-related emergency room visits in all age categories compared to St. Louis County and the State of Missouri. Age groups 25-44 and 45-64 in the City of St Louis have the highest prevalence of above 30 per 1,000 population [F3]. These rates also indicate higher prevalence rates of mental illness treatment services in the City of St Louis compared to the County and State [F4]. 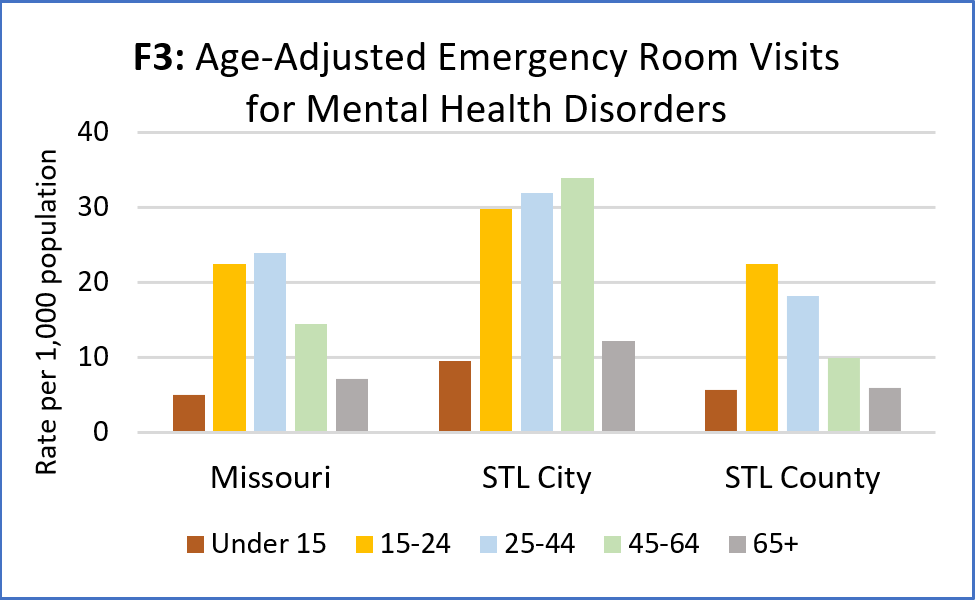 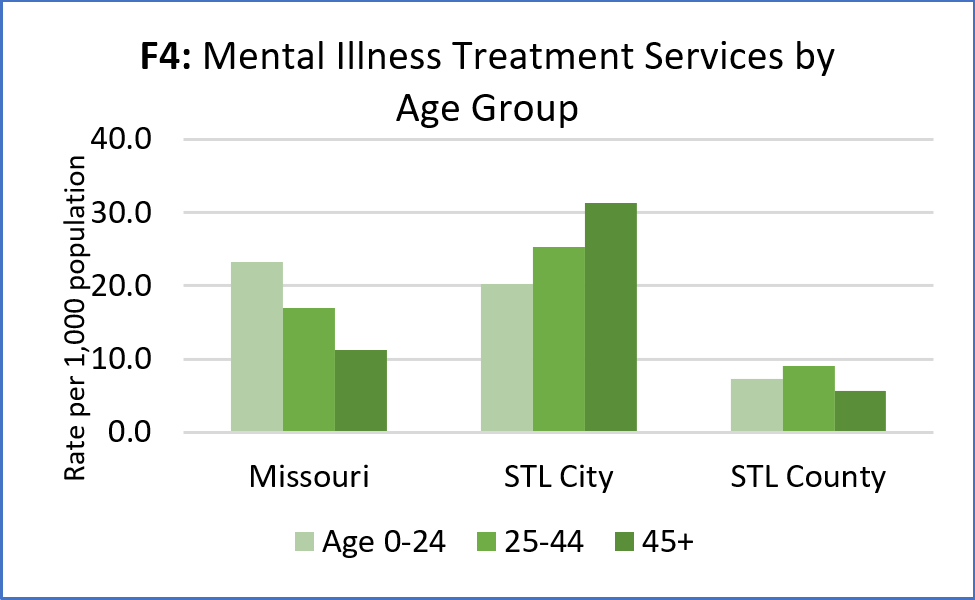 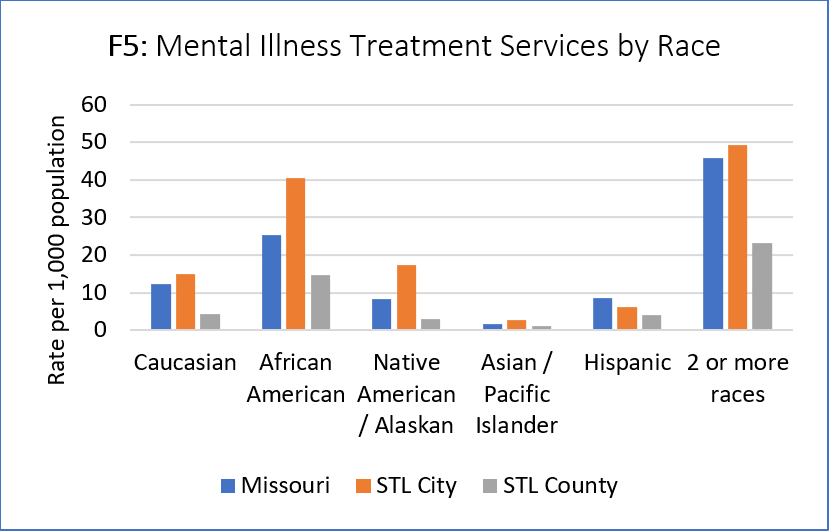 There are evident disparities in the emergency room and clinical services-use related to mental health conditions. In St. Louis City, African Americans have higher rates of anxiety, schizophrenia, mood disorders and alcohol and substance abuse compared to Whites. (3) In 2020, African American individuals in St. Louis City received services from psychiatric programs for mental illness at a rate of 40 per 1,000 population compared to Whites with a rate of 15 per 1,000 population. These race disparities also exist in 2018 and 2019 data. Mental illness rates are highest in St. Louis City for all races besides Hispanics. Furthermore, more African Americans and people of >2 races are most affected by mental illness in both counties and Missouri [F5]. 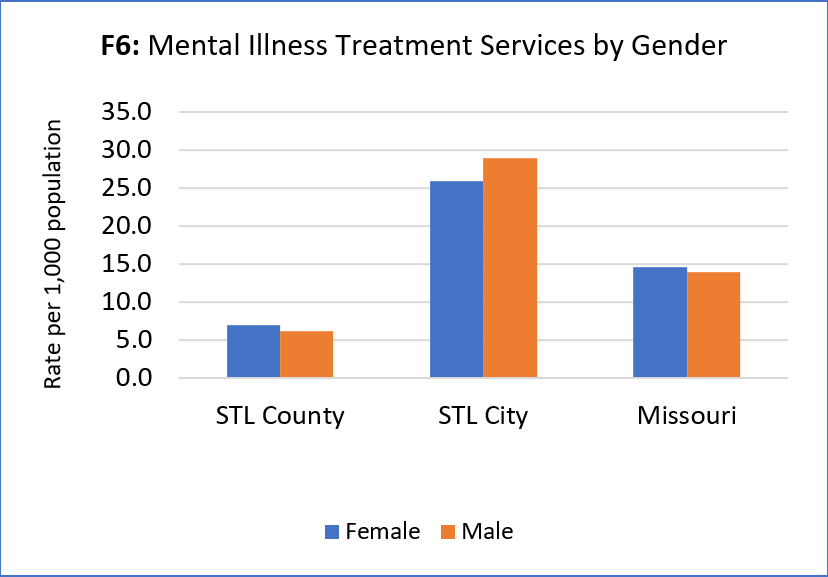 In previous years, people of all ages living in high poverty areas were three times as likely to visit the emergency room for mental disorders than those living in low poverty neighborhoods, with 362.2 vs. 127.9 per 10,000 population from 2012-2016. Females have an overall higher prevalence of mental illness than males. The top three diagnoses for females above 18 were mood disorders, anxiety disorders, and psychoactive substance use, while men were affected by psychoactive substance use, mood disorders, and schizophrenia disorders. The substances used were alcohol and opioid-related . Data from The Missouri Department of Mental Health shows that men of all ages receive more treatment services for mental health in both St. Louis City and St. Louis County than women. St. Louis City data also shows an increased rate of mental illness compared to the County and Missouri overall [F6]. 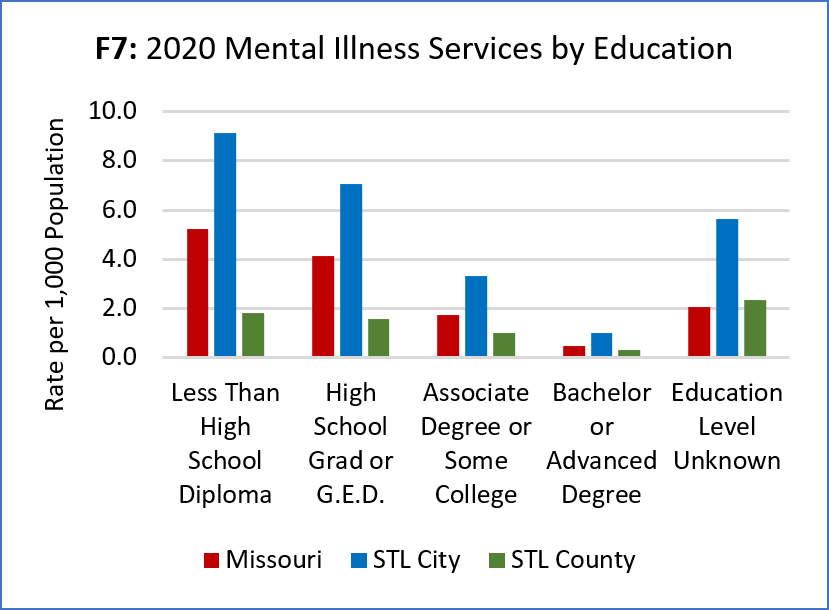 The year 2020 saw a total of 7,887 individuals in St. Louis City receiving services from the Division of Behavioral Health psychiatric programs and 13,051 diagnoses, an increase from 2019 and 2018. (5) The prevalence rate of treatment services in St. Louis city was 26 per 1,000 population, compared to 7 per 1,000 for St. Louis County and 14 per 1,000 in Missouri.(5) Other risk factors affecting mental health include education, employment and living arrangements. These numbers show the need for increased services and rehabilitative services for individuals affected by mental disorders within the city limits. It is important to note that the number of diagnoses is higher than the number of individuals served because some individuals are diagnosed with more than one disorder, resulting in comorbidities. 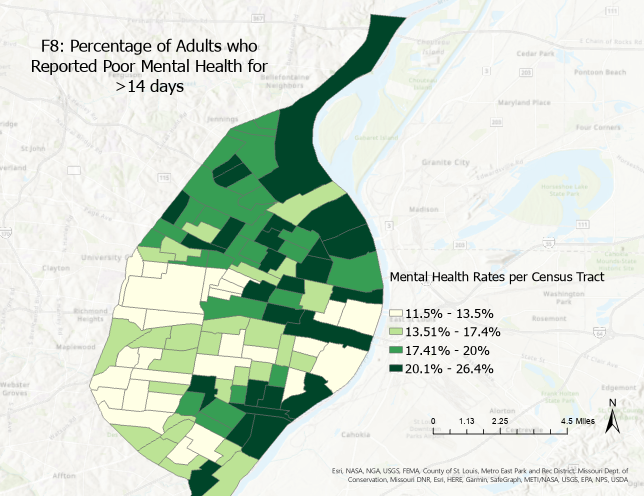 Census data from adults reporting poor mental health in 2018 is shown in Figure 8. There are higher percentages in the North and Southeast parts of St. Louis City. These areas have a predominantly African-American population where poverty and chronic disease prevalence are also high.

High prevalence rates of mental disorders in St. Louis City show the immediate need for increased access to care, treatment and rehabilitation for those diagnosed with mental disorders. Transdisciplinary approaches to providing affordable and easily accessible prevention and treatment methods to mental disorders are vital to decreasing mental health-related deaths and hospitalizations. Reducing the disparities associated with these conditions requires understanding risk factors and eliminating stigma, providing continuous support and rehabilitative services for those affected by mental illness.

What is the Department of Health Doing to Reduce and Control Mental Health Disorders?