Follow the process of how a Bill becomes an Ordinance and is adopted into the City Revised Code.

How a Board Bill Becomes An Ordinance

Legislation is introduced by Aldermen in the form of bills. The Mayor may introduce Bills by requesting the chairmen of specific committees to sponsor such a Bill. Bills are read before the entire Board upon introduction. After the first reading, the Bill is sent to specific standing committee for study and recommendation. The committee, after considering the Bill, reports it back to the full Board for a second reading.

Approval by a simple majority of fifteen or more is required for passage, except for those dealing with the sale of any of the City's real estate or for the discontinuance or establishment of administrative divisions, which require a two-thirds vote. The Mayor may sign or veto a Bill within 10 to 20 days after it is presented to him or her. If the Mayor does not take action, the Bill automatically becomes law. A two-thirds majority is required to overturn a mayoral veto. Unless the measure is an emergency, it does not take effect until 30 days after the Mayor signs the Bill or it is adopted over the veto.

After a bill is adopted by the Board of Aldermen and signed by the mayor it becomes a City Ordinance. St. Louis City Ordinances are available in electronic format cover 1991 - present.

The Life Cycle of a Board Bill 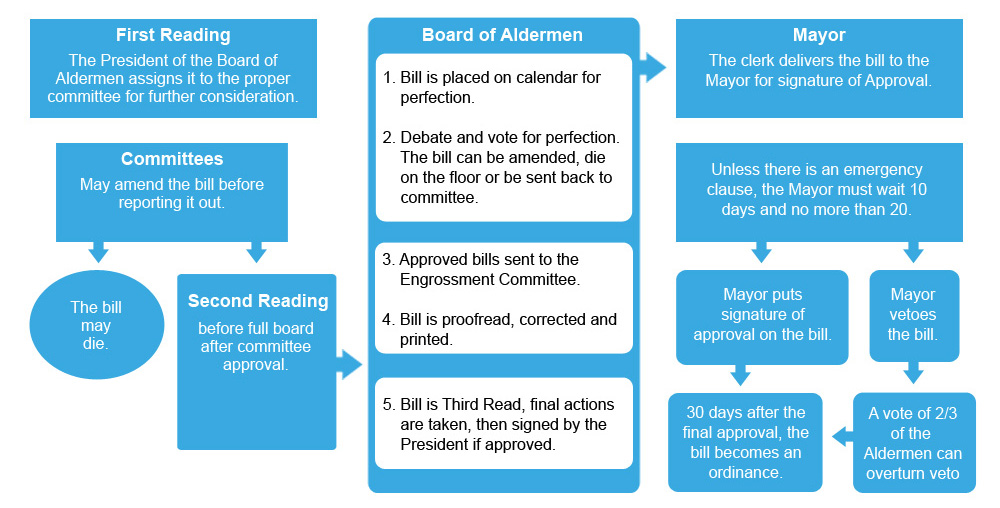 When it comes to passing Board Bills, the Board of Aldermen agenda is broken down into four basic parts.

Introduction of Board Bills

Each Friday, Bills are introduced (first read) during the Board of Aldermen meeting. The meetings are held at 10 A.M. in Room 230. The President then assigns each bill to one of 15 committees.

It is up to the chairman of each committee to schedule hearings to review any Bills that have been introduced and assigned.

During the committee hearing, an alderman will present a Bill to the committee members, discuss its merits and ask that it be sent to the full Board of Aldermen with a “do pass” recommendation. Sometimes, the committee will make changes to the Bill before sending it back to the floor. These changes are called Committee Substitutes or Amendments.

If a sponsor senses that a Bill lacks sufficient support, the sponsor may ask that it remain in committee while changes are drafted. Although rare, sometimes a Bill will remain in committee until the end of the session, at which time the Bill “dies.”

Once a bill has been passed out of committee, it is then ready for Second Reading at the next Board of Aldermen meeting.
There is no discussion of the bill during Second Reading – it’s simply read out loud.

The following week, the bill appears on the Perfection Calendar. This is when the sponsor may stand up and explain to the full Board what the Bill is and ask for support. On controversial Bills, there is often a long and lively debate. This is also the time to make any final changes to the Bill (Floor Substitute).

Board Bills that have been Perfected are now Engrossed. Engrossment is the process of ensuring the bill is in the proper legal form and that all the attachments and exhibits are attached and properly cited in the bill and any and all Exhibits.

After a bill is Perfected the President refers the bill to the Engrossment, Rules, Resolutions and Credentials Committee for Engrossment. The committee reviews the bills and will:

One week after Perfection, the Bill will appear on Third Reading/Final Passage. No more changes can be made to a Bill at this point. Each alderman can either vote “yes” or “no.” It takes 15 “yes” votes to finally pass a Bill and send it to the Mayor’s desk.

There is a procedure by which a Bill can move more quickly through the process. After Second Reading or after Perfection an alderman may ask to suspend the rules and have the bill moved to the next section on the agenda during the same meeting.

The quickest a Bill can go from First Reading to Final Passage is three weeks at a minimum.  It is not unusual, however, for the process to take longer.  It could be several weeks before the Bill gets a committee hearing, which would slow down the process.

The sponsor may ask that a Bill be held in committee while changes are drafted, which will also slow down the process.

The best thing to do is to follow the weekly agenda. If the Bill you’re looking for does not appear on Second Reading, Perfection or Third Reading, then you know the sponsor must be holding it in committee for some reason or the Bill is still waiting for a hearing.

Browse Board Bills by Session