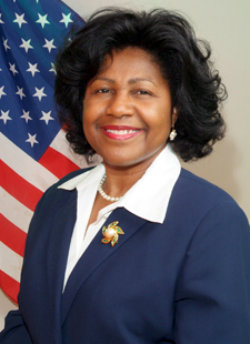 The Honorable Darlene Green, Comptroller of the City of St. Louis, serves as the city’s Chief Fiscal Officer. She directs all the fiscal affairs of the city for a combined annual budget of $1 billion. As Chief Fiscal Officer, she is a member of the Executive Branch of city government, the Board of Estimate and Apportionment. Ms. Green is a member of many citywide boards and commissions, including the Airport Commission, and is a trustee for the city’s Retirement Systems.

Comptroller Green maintains a platform of honesty, fiscal integrity, and a focus on protecting taxpayer dollars. Through her foresight and leadership, the City of St. Louis was not exposed to the variable rate debt crisis of 2006-08, which harmed the credit rating of many other municipal governments.

She holds a Bachelor of Science degree in Business Administration from Washington University in St. Louis and is a member of the National Association of Black Accountants (NABA); Zeta Phi Beta Sorority, Inc.; Government Finance Officers Association (GFOA); and the National Women's Political Caucus of Metro St. Louis.

Comptroller Green has received many honors, including being named a “Trailblazing Woman in Public Finance” by Northeast Women in Public Finance; one of the “52 Most Powerful People in St. Louis” by St. Louis Magazine; and receiving the National Organization of Black Elected Legislative Women’s “Shining Star” award.