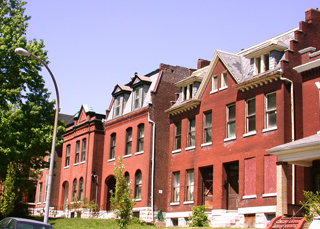 Most of the Hyde Park District is located within the 1850 boundaries of the former Township of Bremen.  The heavily German influenced neighborhood was known for its breweries and brick factories.  Hyde Park is situated to the north of downtown St. Louis and features some of the city's oldest architecture.  The heart of the neighborhood is Hyde Park which was established in 1854.  Buildings surrounding the park consist of large three story townhouses and simple multi-family houses.