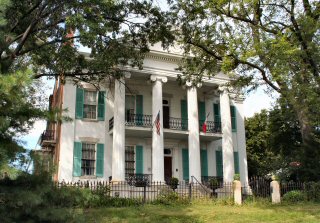 The home was originally built in 1848 as a modest seven room cottage by fur trader and Oregon Trail guide, Henri Chatillon.  Chatillon occupied the home until it was purchased Dr. Nicholas DeMenil in 1856.  Dr. DeMenil transformed the simple cottage into the Greek Revival mansion we know today.  Situated on a hill above the river, the mansion became a landmark for steamboat pilots.  Dr. DeMenil occupied the home until his death in 1882.  The family occupied the home until 1928, after which the home entered a period of deterioration.  In 1961 the house was slated for demolition as part of the I-55 project.  Through the efforts of local preservationists and a substantial donation from Union Electric, the building was spared and restored.