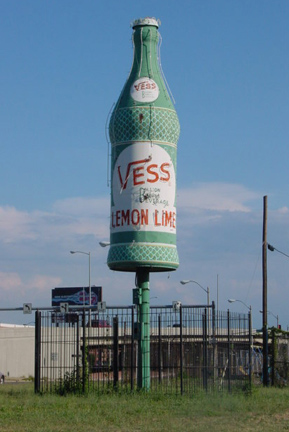 In the early 1950's, the Vess Bottling Company erected a large replica of a Vess Soda Bottle at the corner of Hampton and Gravois Boulevards.  The bottle was 25 1/2 feet tall and weighed over 2,000 pounds.  It stood on a steel pole which revolved at a rate of three revolutions per minute.  The bottle was lit by 600 lineal feet of neon tubing.  After being found in storage in the late 1980's, the bottle found a new home at the corner of 6th and O'Fallon Streets.  The bottle was designated as a City Landmark in 1990.