St. Louis' richest heritage is the distinctive variety of its neighborhoods, in the past and now still strong. Much has been written of the history of the City as a whole but the Community Development Agency presents this as one of the volumes that tell the story of the neighborhoods, one by one, in detail. Each of these Neighborhood Histories was written for the St. Louis Community Development Agency in the early 1970's by Norbury Wayman. They provide a detailed viewpoint of the historical neighborhoods from the vantage point of the 1970's -- the information about the current state of individual neighborhoods may not apply today.

The 27 historical neighborhoods in this were chosen as being distinctive settings by reason of geography, ethnic or historical characteristics, and historical traits and architecture. Main thoroughfares were used as boundaries.

St. Louisans are interested in their neighborhoods. These locality histories will give them a view as to how their neighborhoods came to be through the stories of the development of its land, its changing use and residents. Streets, transit, commerce and industry are covered from the founding of the City to the present. The histories of its churches, schools, parks and institutions are told.

Select a neighborhood from the list or the map for more information. 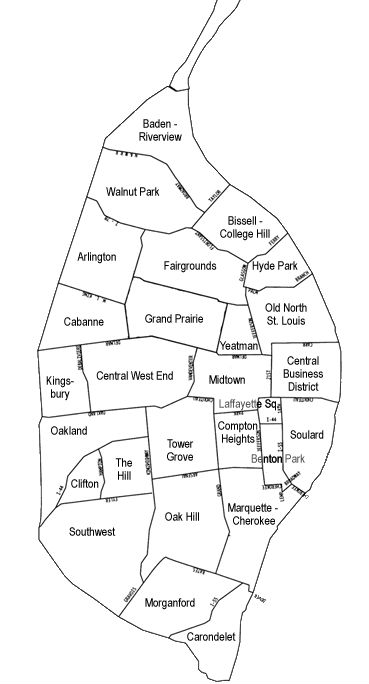