"High style" buildings are distinguished from vernacular types in two ways. High style houses tend to be constructed on a larger scale than their vernacular counterparts, and their interior floor plan and exterior design closely follow established architectural styles of the time. Some are designed by formally educated architects and designers. Others owe their architectural character to published pattern books, that outlined the basic elements of a particular style. In the 19th century, this ordinarily meant an architectural style that had its roots in Greece, Rome, the Middle Ages or the Renaissance. Generally, architectural styles of each period reached St. Louis ten to twenty years later than they appeared on the east coast.

Federal style houses comprise the largest number of 19th century residential buildings remaining in St. Louis. The style was prevalent nationally from the late 18th century through the 1840's, although Federal buildings remained popular in St. Louis past the middle of the century. The Federal style came from England, and was especially predominant in the American colonies. Houses are characterized by relatively simple, symmetrical facades, with a minimal amount of exterior ornament. Cornices were emphasized with decorative moldings, usually including tooth-like dentils, or brick corbelling. Double hung windows of multiple panes carried flat stone lintels, sometimes in a triangular pediment shape. Windows were smaller in relation to the wall surface than in later styles.

The Lewis Bissell House, in the Hyde Park neighborhood, was constructed in 1830, and is illustrative of the Federal style. The brick house has a five-bay front facade, with a hipped roof and two-story rear verandah, its roof supported by two-story square posts with simple capitals. Above the windows on the front facade are jack arches; centered on the second story is a door with sidelights, which once led to a second story porch. The house was built for Captain Lewis Bissell, the son of the first commander of Fort Bellefontaine, who sited it on the high bluffs overlooking the Mississippi. Nearly a victim of the construction of Interstate 70, the house has been restored as a restaurant and dinner theater.

The Greek Revival style followed the Federal, and dominated American architecture from about 1830 to 1860. It became so widespread that it was called the "National Style." Greek Revival developed from an increasing interest in classical buildings, accentuated by archeological investigations early in the century. The Greek Revival house type borrows the forms of classical Greek temples, with low-pitched gable or hipped roof, heavy cornices on both house and porch, and the use of columns or pilasters. Its primary characteristic, however, is the "temple front;" a large pediment placed as the predominant feature of the front facade. Very few examples of the Greek Revival style remain in St. Louis.

The Chatillon-DeMenil House was originally constructed as a Federal house in 1849, but was enlarged to its current appearance in 1863. The brick house is two and a half stories, with a long front and short side elevations. The symmetrical house has a pronounced example of the temple front: the 2-story Ionic columns and pediment illustrate the tremendous visual power of this style. Pilasters at either end support a vast cornice of the Ionic order. The house is now restored as a museum.

The temple front form can also be found on less elaborate houses, like the one at 7018 Michigan, in Carondelet. Constructed about 1860, the frame house is two and a half stories, and wider than it is long. Although the house has been considerably altered from its original design, the gable roof retains its dramatic pedimented cornice, and remnants at either end of the front facade show the location of pilasters. Some of the characteristic multi-light windows also remain. The sketch below is a conceptual idea of how this house may once have looked. 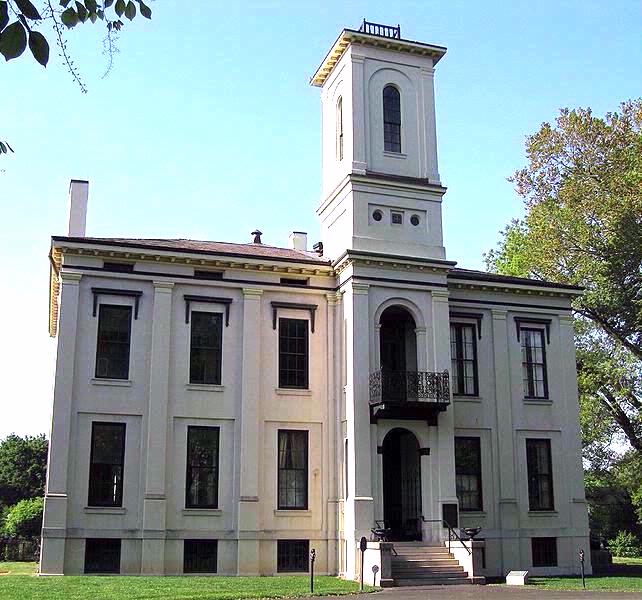 The Italian Villa house type is a decidedly rural house that was popular in St. Louis and nationally during the middle 19th century. The Italian Villa style began in England as part of the Picturesque movement, a reaction to the formal classically-inspired Federal and Greek Revival styles. The house was intended to replicate the Italian country house of the Renaissance; characteristic of the style is a tower or cupola, with the main block of the house placed slightly off center. The hipped roof has widely overhanging eaves; windows are taller and narrower than in earlier styles, and their lintels are highly decorated; the cornice is emphasized with brackets, or small window openings.

Tower Grove House, designed for Henry Shaw by St. Louis architect George I. Barnett in 1849, was located on the grounds of Shaw's country estate (now the Missouri Botanical Garden). The house is constructed of brick, with a tall tower placed between the living quarters for Shaw on the west side and a small service wing on the east. The eastern portion was replaced by a larger addition sometime after Shaw's death; at the same time the exterior walls were covered with stucco. Despite the alterations, however, the house is a prime example of the Italian Villa style, with decorative lintels and heavy cornice, pierced by attic windows.

The Gothic Revival style became favored during the second quarter of the 19th century. Also rising out of the Picturesque Movement in England, the style was one of those promulgated by Andrew Jackson Downing, who wrote a series of immensely influential books about the proper design of a picturesque rural cottage. Usually constructed in frame, but occasionally in masonry, the style is characterized by high-pitched side gable roofs, sometimes L-shaped, or with a central gable; exposed eaves and one-story porches. Windows have pointed arches and decorative moldings. The Gothic Revival style was especially prevalent in the east, where numerous Gothic Cottages were constructed; but the style did not have a lasting impact on domestic architecture in the Midwest.

The house at 5801 Minnesota in Carondelet, is a rare remaining example of the Gothic Cottage in St. Louis. The frame residence has an L-shaped plan, with a smaller section at the rear. The house has tall, pointed arched windows with labels; gingerbread trim on the roof gables and entry porches; and a variety of dormers. The house retains its original board-and-batten siding, a particular attribute of the style.