Street cars were firmly established by the beginning of the 20th century, and railroad transportation continued to become more efficient; but the most dramatic transportation development during this period was the rise of the automobile, which would have an unimaginable impact upon the built environment of St. Louis. Several property types were developed in response to this new transportation technology.

Before the 20th century, the structural materials of bridge construction were wood, iron and steel. To the benefits of reinforced concrete-its durability and ease of fabrication-was added its ability to give the appearance of decorative stone at little cost. Although rarely used until the 1920's, reinforced concrete became a favored material for St. Louis vehicular bridges. The Bellerive Bridge into Bellerive Park is built of reinforced concrete. Heavy concrete piers, with recessed panels and stylized capitals, support the gently curving arch over South Broadway. A decorative pattern of arches forms the handrail.

Late in the 19th century, the street car became the major means of mass transit in St. Louis. As people moved further away from the city, new street car lines developed. At the far northwestern edge of the City, a street car stop was constructed to serve Wellston, a turn-of-the-century suburb in St. Louis County. Wellston Station, from about 1910, is located at 6111 Dr. Martin Luther King Drive, west of Hodiamont. The two-story station is residential in character, reflecting the Arts and Crafts style. From a small brick structure, a large gable roof extends to form sheltered waiting areas, its eaves supported by decorative posts. Brackets appear on the wide eaves of the front and back gables, which have projecting window bays trimmed with false half-timbering. Four gable-roofed dormers pierce the roof on either side. The station is still in use today as a bus stop. 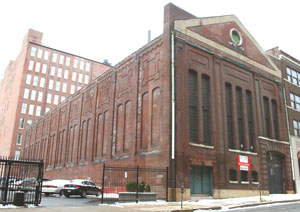 Generator buildings were constructed to house electrical plants for street car operation. The building at 1711 Locust Street, is one of the few remaining examples. The red brick structure, constructed in 1903, has a narrow gable front; three bays with deeply-recessed multi-story openings are marked by pilasters and brick panels. The building was once crowned by a large pediment; its cornice has been removed, although the terra cotta roundel in the center remains. Side elevations display the same narrow bays with pilasters and paired windows.

Railroads also continued to grow and develop between 1900 and 1940, and were a common means of transportation for business commuters to the downtown. The continued growth of the railroads is exemplified by the Wabash Rail Station, constructed in 1928 at 6005 Delmar. The station is a relatively small, Classic Revival limestone building with a gable roof and flat-roofed wings at either end. The entry is recessed in a projecting bay with entablature that extends around the building. Ionic columns are placed between tall, round-arched windows. The station is set high above the train tracks, which are reached by both interior and exterior staircases. Wabash Station is now a stop on the Metrolink line.

A completely new commercial building type was the automobile dealer showroom. These buildings were constructed in the latest architectural styles and featured large storefront windows with wide expanses of plate glass, the better to display large-scale merchandise. The greatest concentration of St. Louis auto dealerships was located before World War II between Jefferson and Grand Avenues, north of Olive. The former Chevrolet dealership at 3370 Locust Street, was constructed in 1915, from plans by Preston Bradshaw. Called the Pink Building because of the unusual color of its exterior stucco walls, it reflects the Mission Revival style. The building is located at the intersection of three streets, and is a distinctive "flatiron" triangular shape. The primary facade faces Locust, and has a tall, projecting central bay, containing an ornate entry, with ornate surround, and large bas-relief sculpture above. The remainder of the building is lightly decorated by belt courses and triple windows with transoms. It has been rehabilitated into apartments.

Another new property type created to serve the automobile was the service, or filling station. Soon appearing throughout City neighborhoods, these small one-story structures were designed to complement the residential areas in which they were located, reflecting popular housing styles of the time. The filling station at 4401 Laclede in the Central West End is typical. A Mission Revival design, the building has a red tile roof, with white glazed brick facades. The central bay of the front elevation has a high, shaped gable; a smaller gable is placed at the corner. Both entries are set under semi-circular transoms. The station is still in use, and except for the replacement of some original plate glass windows, remains nearly unaltered.

In downtown, the need for parking garages became evident quite early. More people acquired cars, and the resulting traffic added to relatively narrow car lanes (street cars occupied the center of most avenues) made parking on the street difficult. The garage at 926 St. Charles was constructed in 1905, and was intended by its exterior detailing to complement surrounding office buildings. The brick-faced, reinforced concrete building has five levels of parking. Large open arches supported by brick piers rise three stories at the street facades; the fourth story is marked by large rectangular windows. The building still functions as a garage, although its exterior has been greatly altered.

The Municipal Garage at 300 Tucker Boulevard, was constructed in 1928 of reinforced concrete with brown brick walls. Three stories in height, the garage is designed in a modified late Romanesque Revival style, displaying a central block with semi-circular windows centered above vehicle doors, and a battlemented parapet above. Corbel tables mark the bays of the third story, and extend around the building at the second floor level. Windows throughout are metal multi-light industrial sash. The Municipal Garage has four levels of parking, including the roof, and is still used as the City garage; the southern half of the building is a Fire House.